View cart “HILLARY (AND BILL): The MURDER Volume” has been added to your cart. 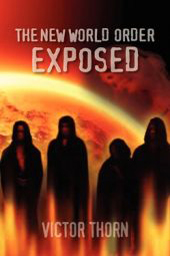 There’s nothing new about the New World Order. It is a conspiracy—not a conspiracy theory—and its very roots can be found in the Garden of Eden. Today those who are tilling this soil for their own insidious ends are in positions of power in government, the media and in academia. In order to comprehend the nature of this monster—this enemy of liberty—you need to read and understand Victor Thorn’s The New World Order Exposed.

Finally, the veil of illusion has been lifted by one of the most comprehensive books ever written about the New World Order. Now everyone can see beyond the conditioning and lies perpetuated by our political leaders and their mainstream media minions.

If you want one reference book that you’ll return to day-after-day and year-after-year, open the front cover of The New World Order Exposed and you’ll begin to discover how the world really works. This book will shock, unsettle and enrage you but, in the end, the truth will set you free. If you are fed up with the status quo and feel as if you’re not being given the full picture, take the first step: read this book. Like a reality bomb, it will forever change your perspective on the world in which we live.

2) 25 more Reasons that Suggest the Controllers Not Only Knew About the 9/11 Terrorist Attacks, but also allowed them to happen (while failing to disclose the full story to us)

3) Military Smokescreen: Who Commanded the Air Force to ’stand down’?

4) Notes and Quotes: The War on Terrorism—Money, Fear and Rights

8) The War in Afghanistan: Opium and Oil

12) Banks, Oil, and Drug Trafficking: An Overview of Mike Ruppert’s The Truth and Lies of 9/11

13) The Psychology of Control Systems

14) Yes, Virginia, There is a New World Order

15) The Controllers and their Evil Goals

16) Compartmentalization and the Need to Know

18) Review: Lawrence Dawson’s The Death of Reality: How a Conspiracy of Fools is Imposing Unreality and Laying Claim to the Destiny of a Nation

20) Notes and Quotes: This Is How Our Fine Country Was Destroyed in 1913

21) Who Controls the Federal Reserve System?

22) The Federal Reserve System Must Be Destroyed

23) Do We Want To Save America? Then Demand that We Destroy the Federal Reserve and Default on our National Debt

24) Financial Enslavement and the Federal Reserve: An Overview of Peter Kershaw’s Economic Solutions

26) China, the Mossad, and Artificial Intelligence

30) The Terminator Gene: Who Controls the World’s Food Supply? An Overview of Texe Marrs’s Days of Hunger, Days of Chaos

34) Why Did Americans Finance the Bolshevik Revolution?

38) FDR and the Controllers: War-Time Traitors—Russia and the Atomic Bomb

39) Adolf Hitler and Black Magic: The Real Reason behind the Nazi Party’s Rise to Power—A Review of The Spear of Destiny by Trevor Ravenscroft

41) Notes and Quotes: The Rockefeller File by Gary Allen

45) Notes and Quotes: The Freemasons, Lucifer, the New World Order and Beyond

46) Civilization, History, and the Decline of the West: An Overview of Samuel P. Huntington’s The Clash of Civilizations and the Remaking of World Order

47) Who Controls the American Presidency?

49) An Overview of Gerald Carroll’s Project Seek: Onassis, Kennedy, and the Gemstone Thesis

50) An Overview of Michael Collins Piper’s Final Judgment: The Missing Link in the JFK Assassination Conspiracy

53) Why Doesn’t the Media Tell Us About the Bilderbergs?

54) The American Media Should Be Ashamed of Itself

56) Mainstream Media Cowardice: An Overview of Into the Buzzsaw

57) Reviewed: The Octopus—Secret Government and the Death of Danny Casolaro by Kenn Thomas and Jim Keith

59) The Man Who Runs Happy Valley

60) The Story Behind the High School Shootings

61) An Alien Base Beneath Beaver Stadium

64) Frogs Being Boiled to Death in a Pot

66) Do We Care Enough To Save America?

68) An Interview with Victor Thorn

69) Afterword: “He Who Would Face the Winds” by Lisa Guliani