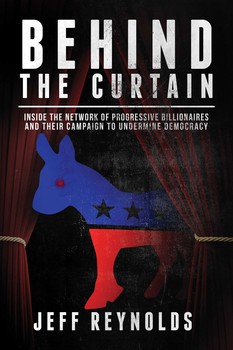 Behind the Curtain takes a look where the Leftist billionaire’s club doesn’t want you to go—into the world of dark money and influence that has only one goal: to stop conservatives and Donald Trump by any means necessary.

You’re probably familiar with George Soros. You may be familiar with Tom Steyer. You may even know who their other billionaire buddies are on the Left, and which foundations they use to exert political pressure. But do you know how they organize their dollars and their organizations to have maximum impact, while shielding themselves from voter scrutiny and criminal charges? Behind the Curtain is a look into the murky world of dark money—massive amounts of it aligned to push a far-left agenda that would make even mainstream liberals shiver.

Behind the Curtain reveals the sordid web of limousine liberals and subversive billionaires in a chilling tale of power, greed, envy, and the politics of personal destruction. It is also the story of the lengths to which the organized Left will go to overturn the results of the 2016 election using the courts, a shadowy network of nonprofit organizations and consulting firms, and an increasingly compliant media.