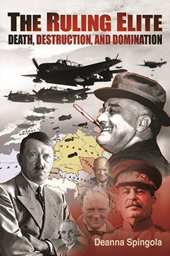 Providing a general overview of the accurate history of World War II—which was essentially a continuation of World War I with the same saber-rattling participants—The Ruling Elite: Death, Destruction, and Domination, describes the circumstances leading up to World War II. Author Deanna Spingola discusses how the diaspora-distributed international bankers living and prospering in Britain, France, and America influenced greedy, compromised, and complicit politicians in those nations.

The Ruling Elite explains that through deceptive propaganda, those politicians persuaded naïve citizens to wage war against Germany, a peace-loving nation whose leaders were uncooperative with the bankers, which led to World War I. Following that war, German officials rejected the bankers and their money-lending scheme to save their nation and its citizens from the burden of debt. The aftermath of World War II—a deadly war that killed millions and imposed communism in numerous countries—impacted every banker-occupied country in various ways: culturally, morally, politically, and economically.

Researched through historical documents and scholarly works, The Ruling Elite describes how warmongers regularly project their criminal activities onto others, frequently blaming the victim, whether an individual or a nation. Spingola offers an unbiased look at World War II beginning with Hitler and the rebirth of Germany through the aftermath of the war.

Deanna Spingola (born February 17, 1944) is an American author, historian and radio host, prominent in the alternative media. Spingola has released three books specialising in the ruling elites of Western society, particularly during the 20th century and the seizure of world power by Zionists. Spingola hosts a regular radio show on BlogTalkRadio (presently aired on a weekly basis) called Spingola & Friends, she previously hosted Spingola Speaks on the Republic Broadcasting Network from 2012-2014 and The Spingola Zone on the American Free Press Network from 2013-2014. Her website also features a chatroom, a collection of articles she has authored since 2005 and even a guide to genealogy.