The GREATEST COMEBACK: How Richard Nixon Rose from Defeat to Create the New Majority 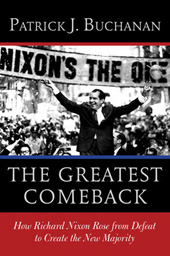 Patrick J. Buchanan, bestselling author and senior advisor to Richard Nixon, tells the definitive story of Nixon’s resurrection from the political graveyard and his rise to the presidency.

After suffering stinging defeats in the 1960 presidential election against John F. Kennedy, and in the 1962 California gubernatorial election, Nixon’s career was declared dead by Washington press and politicians alike. Yet on January 20, 1969, just six years after he had said his political life was over, Nixon would stand, taking the oath of office as 37th President of the United States. How did Richard Nixon resurrect a ruined career and reunite a shattered and fractured Republican Party to capture the White House?

In The Greatest Comeback, Patrick J. Buchanan—who, beginning in January 1966, served as one of two staff members to Nixon and would become a senior advisor in the White House after 1968—gives a firsthand account of those crucial years in which Nixon reversed his political fortunes during a decade marked by civil rights protests, social revolution, the Vietnam War, the assassinations of JFK, RFK, and Martin Luther King Jr., urban riots, campus anarchy, and the rise of the New Left.

Using over 1,000 of his own personal memos to Nixon, with Nixon’s scribbled replies back, Buchanan gives readers an insider’s view as Nixon gathers the warring factions of the Republican Party—from the conservative base of Barry Goldwater to the liberal wing of Nelson Rockefeller and George Romney, to the New Right legions of an ascendant Ronald Reagan—into the victorious coalition that won him the White House. How Richard Nixon united the party behind him may offer insights into how the Republican Party today can bring together its warring factions.

The Greatest Comeback is an intimate portrayal of the 37th President and a fascinating fly on-the-wall account of one of the most remarkable American political stories of the 20th century.

Patrick J. Buchanan was a senior adviser to three American presidents; ran twice for the Republican presidential nomination, in 1992 and 1996; and was the Reform Party candidate in 2000. The author of more than a dozen books, including the bestsellers Right from the Beginning; A Republic, Not an Empire; The Death of the West; State of Emergency; and Day of Reckoning, Buchanan is a syndicated columnist and founding member of three of America’s foremost public affairs shows: NBC’s The McLaughlin Group and CNN’s The Capital Gang and Crossfire.

“An evenhanded insider take on Nixon’s storied political rebirth. . . . Buchanan deals the story with a great deal of humility. . . . Much more a balanced history than a me-me-me memoir.”–Chicago Tribune

“Should be required reading for RNC staff and everyone across the country trying to help the GOP win the Senate. . . . A fun read not only for the opportunity to see Nixon in such a personal, behind-the-scenes way, but also for the lessons it offers us today.”–Newsmax

“A fast-moving account of those comeback years, written in strong, clear prose. . . . An upbeat portrait of Nixon as a surprisingly compassionate man, but a tough politician, energetic and well-informed, with a deep knowledge of world affairs and ideas about how to reset the balance of power and restore America’s international standing.”–Washington Times

“Buchanan’s book performs the useful service of describing a populist triumph from the inside.”–The Economist

“A conveniently incisive study guide to the 1968 presidential election. . . . In his own unsparing way, Buchanan sums up the political tumult of the era—tumult signaling that the long reign of the New Deal, the Fair Deal, the New Frontier, and the Great Society were coming to an end.”–Breitbart

“Offers memories and insights on the meetings, memos, stump speeches, and conversations Nixon waded through to get to the White House. Details and factoids abound for politics junkies. . . . Buchanan is a capable writer and skilled at providing succinct summary of the complex politics of the era.”–Publishers Weekly