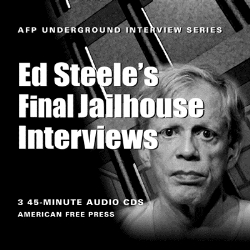 Over a nine-day span in May of 2011, AFP’s Dave Gahary conducted a series of prison telephone interviews with Edgar J. Steele, which took place a few weeks after his guilty verdict. Stored for years in the AFP tape vault, these never-before-heard recordings offer a rare peek into the man many of you have come to know, respect and admire. Ed recounts his mistreatment by his captors, the incongruence of the charges and his undying love for his wife.