The Southerner: The Real Story of Abraham Lincoln

View cart “BLACKBALLED by HISTORY: True Tales of Some of History’s Most Demonized Characters” has been added to your cart. 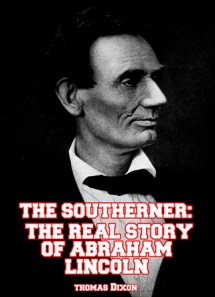 By Thomas Dixon. Have we become too used to the idea of Lincoln as the maniacal despot? Did he have other plans in mind for the racial integrity of America? Have we undersold Lincoln’s intentions in regard to the freeing of slaves?

Contrary to the Spielberg/Hollywood myth, Abraham Lincoln’s greatest desire was to free blacks from slavery—and then send them all back to Africa. Was this the reason he was killed?
Only an assassin’s bullet halted him from implementing these plans, as revealed in this engrossing work from Thomas Dixon Jr., the famed author of the Reconstruction Trilogy (which included The Leopard’s Spots, The Clansman and The Traitor).
Set against a backdrop of the major events of the Southern War for Independence, this narrative cuts through the lies and distortions now spouted by Hollywood and reveals the true details of Lincoln’s policies while in office.
Was Lincoln actually murdered to ensure that Southerners were forced to integrate with Negroes? Was forced miscegenation on someone’s ultimate agenda?
Lincoln did destroy slavery, and he did restore the union (at the cost of about 650,000 American lives). But, after that, there remained just two tasks on which his soul was set—to heal the bitterness of the war and remove the Negro race from physical contact with the white. He at once addressed himself to this work with enthusiasm.
He summoned a Vermont contractor, and put him to work on estimates for moving the Negroes by ship to Africa or by train to an undeveloped Western territory.
Lincoln knew that two such races as the Negro and Caucasian could not live side by side in a free democracy. However, a coven of radical theorists in Congress demanded that these former slaves, emerging from 400 years of forced bondage and savagery should receive the ballot and the right to claim the white man’s daughter in marriage.
These racial radicals knew they could only pass these measures over the dead body of Abraham Lincoln.
The author says, “Every word in relating to the issues of our national life has been drawn from authentic records in my possession. Nor have I at any point taken a liberty with an essential detail in historical scenes.”
A completely unique look at Lincoln and his attitude toward slavery and the black man in general that has Lincoln lovers howling in objection to this “defamation” of Lincoln’s character.
Softcover, 351 pages, 6″× 9″