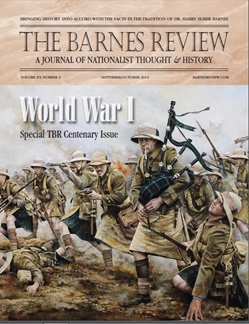 This print edition costs $10 from THE BARNES REVIEW.

Get it from AFP in PDF format for only $5 during this limited-time promotion.

One hundred years ago (1914-1918), all across Europe and the Near East, Europeans were slaughtering each other in droves. It is said that in the first several minutes of WWI fighting, 10,000 men died. It was carnage on a massive scale, killing tens of millions and in the end throwing Europe—then experiencing a golden age—into chaos and blood.

What were the real causes? Who is to blame? Was it the bankers? Greedy Wall Street parasites? The global Zionist network? Land-hungry royals? Anarchistic revolutionaries? The Ottomans? The French? The Brits? The Germans? The Austrians? The Russians? The Serbs?

In this Special Centenary WWI Issue of TBR, we explore all of this and more, including articles on German attempts to strike the U.S. mainland with sabotage, the latest on the Lusitania disaster, the Rothschilds’ Bolshevik assassins, the exploits of the U.S. 96th Aero Squadron in France, the true toll of the war and an analysis of the Treaty of Versailles—the vengeful diktat that many blame for causing the conditions that spawned World War II.