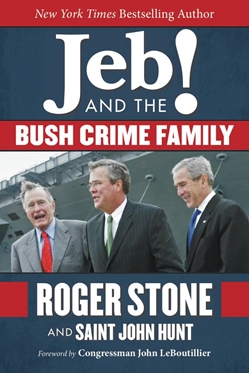 In his usual “go for the jugular” style, Stone collaborates with Saint John Hunt, the son of legendary CIA operative E. Howard Hunt, to make this a “no-holds-barred” history of the Bush family.

The authors reveal Jeb to be a smug, entitled autocrat who both uses and hides behind his famous name as he mingles with international drug peddlers. They show how Jeb:

* Received a $4 million taxpayer bailout when his daddy was vice president;

* Used his insider status to make millions from Obamacare;

* Hypocritically supports the War on Drugs, despite his own shocking drug history.

Jeb! and the Bush Crime Family will have you asking, “Why aren’t these people in prison?”