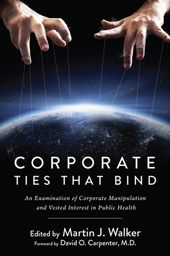 Edited by Martin J. Walker. In the 21st century, corporations have worked their way into government and, as they become increasingly more powerful, arguments about their involvement with public health have become increasingly black and white. With corporations at the center of public health and environmental issues, everything chemical or technological is good, everything natural is bad; scientists who are funded by corporations are right and those who are independent are invariably wrong. There is diminishing common ground between the two opposed sides in these arguments.

Corporate Ties that Bind is a collection of essays written by influential academic scholars, activists, and epidemiologists from around the world that scrutinize the corporate reasoning, false science and trickery involving those, like in-house epidemiologists, who mediate the scientific message of organizations who attack and censure independent voices. This book addresses how the growth of corporatism is destroying liberal democracy and personal choice.

Whether addressing asbestos, radiation, PCBs, or vaccine regulation, the essays here address the dangers of trusting corporations, and uncover the lengths to which corporations put profits before health.

Martin J. Walker is a British activist, investigator, and writer. Since 1990, he has focused on lobby groups and the influence of multinational corporations on medicine, medical research, and public health. Walker contributed to Lennart Hardell’s paper “Secret Ties to Industry and Conflicting Interests in Cancer Research,” which appeared in the American Journal of Industrial Medicine and led to Walker, Hardell, and the late Bo Walhjalt producing this book. David O. Carpenter, MD is director for the Institute for Health and the Environment and a professor of environmental health sciences at University at Albany’s School of Public Health.

“Congratulations to the courageous souls who wrote this book. Those who speak out about the harmful effects of toxic chemicals and radiation often do so at their peril. Corporate Ties That Bind is an important and much needed book that warns of the undue influence corporations have in perverting science, delaying public health policy, and swaying media information. A society that doesn’t protect its children doesn’t have a future. If you care about your health and the health of your children, this book is a must read.”—Dr. Magda Havas, BSc, PhD, Associate Professor, Trent School of the Environment, Trent University, Peterborough, Canada

“Are we to blame for living in unhealthy homes and communities? Or are we being manipulated by governments and corporations that say the onus is on health scientists to prove that a new product or technology is harmful, rather than on industry to prove it is safe? The case studies in this book elucidate how corporations control us, our scientists, and our policymakers to maximize profits at the expense of our health and safety.”—Joel M. Moskowitz, PhD, director, Center for Family and Community Health, School of Public Health, University of California, Berkeley

“This monumental volume represents decades of dedicated research and expertise into major issues of industrial influence against national and international public health. This exposé will lead to more fairness in public and occupational health and to a new generation of objective public health-oriented advocates.”—James Huff, PhD, formerly head of IARC Monographs Program (France) and Associate Director for Chemical Carcinogenesis, National Institute of Environmental Health Sciences (US)

“This timely and important book makes the compelling argument for reform of the so-called ‘industry safety standards’ that permeate our everyday lives. Lucid, authoritative, and essential reading for ourselves and our children.”—Brian Stein and Jonathan Mantle, authors of The Microwave Delusion

“This book takes us another important step forward in the struggle for the health of future generations.”—Professor Yury Grigoriev, deputy chairman of the Scientific Council on Radiobiology of the Russian Academy of Sciences, President of Russian National Committee on Non-Ionizing Radiation Protection, Member of International Advisory Committee of WHO EMF and Health Project

“The use of corporate power to ‘manufacture scientific doubt’ about the harmful effects of their products in the minds of the public and regulators has been documented for tobacco. Corporate Ties That Bind casts its net wider to include a host of other examples that reveal the depths that corporations can go to defend their products, creating distorted science, health and environmental harm, and huge taxpayer costs that fly in the face of the ‘polluter pays’ principle.”—David Gee, retired senior science adviser, EEA, & visiting fellow, Institute of Environment, Health and Societies, Brunel University, London