ONE in a MILLION: An IRS Travesty 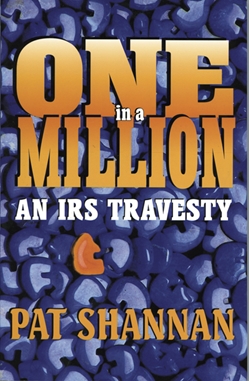 A hard-hitting and well-written drama, ONE in a MILLION: An IRS Travesty, tells the harrowing story of a successful American businessman and devoted family man who found his life turned upside down by corrupt IRS insiders after he dared to delve, like other patriots, into researching the history of our tax system and its insidious origins.

Although the book is a novel, it is founded on truth, in more ways than one. Without ever once interfering with his course of telling a slam-bang story, Pat effectively weaves into the narrative factual data about the IRS and the Federal Reserve conspiracy and other little known aspects of American and world history. Pat’s inspiration for the book was a real-life case of IRS treachery that led to the suicide of a good and decent American woman, Chavala Warman, in whose memory the book is dedicated.

However, be warned: this is not a book for those who like to think that “our” government is good and that the IRS is just another government agency that’s trying to keep our system running. ONE in a MILLIONdescribes how a gutsy group of Americans from all walks of life, a colorful collection of hard-driving patriots, decided that it was time to turn the tables on the IRS and give it a dose of its own medicine.

Some of the endorsements for the book are worth noting. For example, former U.S. Rep. George V. Hansen (R-Idaho), long an outspoken critic of the IRS, for which reason he was politically targeted by the Justice Department and jailed on trumped-up corruption charges that were later overturned, but only after he spent a year in prison, had this to say: “Pat Shannan uses the truth to create wonderful fiction.” And Ted Gunderson, who retired as special agent in charge of the FBI office in Los Angeles, said that Shannan’s book “provides an insight into the inner workings of an evil international shadow government that affects our lives on a daily basis.”

Gordon Kahl, 63, had been tracked down and shot in the back of the head in Arkansas. The remote farmhouse was torched with gasoline by federal agents. Arthur Kirk, 49, was shot in his yard by officers in Nebraska. Donald McGrath, 51, was shot and killed in his car in front of his wife and son by officers in Minnesota. Their “crimes” were all identical. They had spoken out against and had refused to pay tribute to Caesar’s new monetary policy. The federal government was laying down the ground rules for its Mafioso tactics of enforcement. Its underlying, unwritten edict was, apparently, “Obey or Die.”