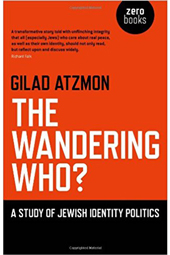 38 in stock (can be backordered)

An Examination of Jewish Identity Politics

The Wandering Who is an investigation of Jewish identity politics and Jewish contemporary ideology using both popular culture and scholarly texts. Jewish identity is tied up with some of the most difficult and contentious issues of today. The purpose in this book is to open many of these issues up for discussion.

Atzmon examines the tribal aspects embedded in Jewish secular discourse, both Zionist and anti-Zionist; the “holocaust religion”; the meaning of “history” and “time” within the Jewish political discourse; and the anti-Gentile ideologies of secular Judaism. He questions what it is that leads Diaspora Jews to identify themselves with Israel and affiliate with its politics.

Since Israel defines itself openly as the “Jewish State,” we should ask what the notions of “Judaism,” “Jewishness,” Jewish culture,” and “Jewish ideology” stand for. Gilad examines the tribal aspects embedded in Jewish secular discourse, both Zionist and anti-Zionist; the “holocaust religion”; the meaning of “history” and “time” within the Jewish political discourse; the anti-Gentile ideologies entangled within different forms of secular Jewish political discourse and even within the Jewish left. He questions what it is that leads Diaspora Jews to identify themselves with Israel and affiliate with its politics.

The devastating state of our world affairs raises an immediate demand for a conceptual shift in our intellectual and philosophical attitude towards politics, identity politics, and history.

Film About The Wandering Who

Atzmon speaks about The Wandering Who? Israel, Zionism Jewishness, Jewish identity politics, tribalism and so on. A film by Tali Atzmon.

Gilad Atzmon is a British Jazz artist and author. Gilad was born in Israel in 1963 and trained at the Rubin Academy of Music, Jerusalem (Composition and Jazz). A multi-instrumentalist he plays saxophones, clarinet and ethnic woodwind instruments . His album Exile was the BBC jazz album of the year in 2003. He was described by John Lewis at the Guardian as the “hardest-gigging man in British jazz.” Atzmon tours extensively around the world.   His albums, of which he has recorded fifteenth albumsto date, often explore political themes and the music of the Middle East.

“Gilad Atzman has written an absorbing and moving account of his journey from hard core Israeli nationalist to a de-Zionized patriot of humanity and passionate advocate of justice for the Palestinian people. It is a transformative story told with unflinching integrity that all (especially Jews) who care about real peace, as well as their own identity, should not only read, but reflect upon and discuss widely.”—Richard Falk, Albert G. Milbank Professor of International Law Emeritus, Princeton University, author of over 20 books, and United Nations Special Rapporteur for Occupied Palestinian Territories

“Gilad Atzmon has written a fascinating and provocative book on Jewish identity in the modern world. He shows how assimilation and liberalism are making it increasingly difficult for Jews in the Diaspora to maintain a powerful sense of their ‘Jewishness.’ Panicked Jewish leaders, he argues, have turned to Zionism (blind loyalty to Israel) and scaremongering (the threat of another Holocaust) to keep the tribe united and distinct from the surrounding goyim. As Atzmon’s own case demonstrates, this strategy is not working and is causing many Jews great anguish. “The Wandering Who?” should be widely read by Jews and non-Jews alike.”—John J. Mearsheimer, R. Wendell Harrison Distinguished Service Professor of Political Science at the University of Chicago

“It is a scholarly and truly monumental work, deeply profound and, of course, controversial.”—Alan Hart, British Journalist and covert diplomat in Middle East, ITN’s News at 10, BBC’s “Panorama”

“Gilad Atzmon is the Moses of our time, calling all of us out of the Egypt of our boneheaded nationalisms and racialisms and exceptionalisms and chosen-people-isms toward some form of humanistic universalism.”—Dr. Kevin Barrett, author of Truth Jihad

On Gilad Atzmon’s Book “The Wandering Who” and the Reactions

Gilad Atzmon’s book The Wandering Who about Jewish identity politics has, since its publication three years ago, sparked most different reactions as well as particularly lively debates, as a glance on the controversial author’s Wikipedia page shows. Some view him as an inspired fighter for justice, as an undaunted source of ideas and impulses, even a prophet, while others despise him as an “anti-Semite” and demonize him as a soul catcher in the quagmire of extreme right-wing ideas. What’s in this prophetic devil’s book? What do people say about it? What is to make of it?

What happens on the 202 pages between the two covers resembles an elaborate jazz piece in its composition: Themes are employed and varied, circles closed, biographical details interpolated. At the heart of the study are—in a nutshell—two major theses: that there is a political ideological “Jewish-ness” which by far exceeds the boundaries of Zionism, and that, in this context, there is a deep gap between tribal interest politics and universal standards within the range of Jewish opinions: Jerusalem versus Athens, known from the problem of the Jewish vs. the democratic state. In 22 chapters, organized in four parts and supplemented by diverse fore- and afterwords, the author analyzes the heterogeneous Jewish collective from which he originates, often in a context with the Israeli crimes against the Palestinians. The self-critical impulse at the root of his criticism can be understood while reading the epilogue, where Gilad Atzmon recounts an episode from his school days in Israel: On a visit to Yad Vashem the 14-year-old asks the teacher why so many Europeans loathed the Jews so much and in so many places at once. The subsequent punishment did not silence the querist; apparently, similar scenes were to follow. Thus the author self-assesses not to look at Jews or Israelis, but in the mirror (p 94). This is essential for understanding his motivation.

Sept. 26, 2011, SilviaCattori.net
Gilad Atzmon somehow manages to express his thoughts, ignoring any recognised taboos or restrictions. His style is innovative, fresh, and consistently well informed. We have read with great interest his latest book The Wandering Who? A Study of Jewish Identity.” It is a very moving account that should be read by many.

Silvia Cattori: “The Wandering who?” — What stands behind this provocative title?

Gilad Atzmon: The Wandering Who? attempts to search for a deeper understanding of Jewish culture and Jewish identity politics. It is there to tackle some issues most of us prefer to avoid. Three years ago Israeli historian Shlomo Sand published his ground breaking work on Jewish history, thus dismantling the phantasmal Jewish historical narrative.

In my book, I attempt to take Sand’s quest one step further and elaborate on the problematic Jewish attitude towards history, the past , and temporality in general. Five years ago American academics Mearsheimer and Walt published an invaluable study on the Israeli Lobby in the United States. I again try to pick up their research where they left off. I try to explain why lobbying is inherent to Jewish politics and culture.

Two decades ago, Israel Shahak published his crucially important study of the Talmud, and in my work, I want to extend his study, and grasp the deeply racist and anti-gentile attitude that is intrinsic to any form of Jewish secular identity politics, be it Zionism, Jewish socialism and even Jewish anti Zionism. In The Wandering Who? I try to shake every common perception of Jewish identity politics.

Silvia Cattori: The Wandering Who? is a very impressive testimony. It can not be ignored, including by your opponents. I think it can safely be said that no one before you has explained so frankly some of the thorniest aspects of the Israeli-Palestinian issue. Your analysis is important for anyone seeking to understand what certain groups want to hide, and why. It should lead people that are deliberately kept in the dark and in a state of confusion, to see things more clearly. This includes, of course, the so-called ‘progressive’ circles.

Gilad Atzmon: Thanks so much for your support and compliments.