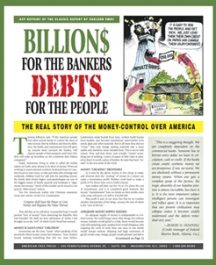 BILLIONS for the BANKERS, DEBTS for the PEOPLE PDF