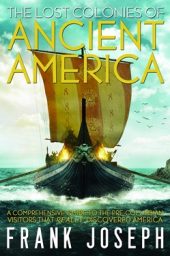 A Comprehensive Guide to the Pre-Columbian Visitors Who Really Discovered America: The Original Visitors to the New World Revealed

Was America truly unknown to the outside world until Christopher Columbus “discovered” it in 1492? Could a people gifted enough to raise the Great Pyramid more than 4,000 years ago have lacked the skills necessary to build a ship capable of crossing the Atlantic? Did the Phoenicians, who circumnavigated the African continent in 600 BC, never consider sailing farther? Were the Vikings, the most fearless warriors and seafarers of all time, terrified at the prospect of a transoceanic voyage?

If so, how are we to account for an Egyptian temple accidentally unearthed by Tennessee Valley Authority workers in 1935? What is a beautifully crafted metal plate with the image of a Phoenician woman doing in the Utah desert? And who can explain the discovery of Viking houses and wharves excavated outside of Boston?

These enigmas are but a tiny fraction of the abundant physical proof for Old World visitors to our continent hundreds and thousands of years ago. In addition, Sumerians, Minoans, Romans, Celts, ancient Hebrews, Indonesians, Africans, Chinese, Japanese, Welsh, Irish, and the Knights Templar all made their indelible, if neglected, mark on our land.

Nominated by Japan’s Savant Society as Professor of World Archaeology, Frank Joseph is a veteran scuba diver and participant in hundreds of underwater expeditions off the coast of Africa, in the eastern Mediterranean Sea, the Gulf of Mexico, and Polynesia. The editor-in-chief of Ancient American magazine from 1993 to 2007, he has traveled the world collecting research materials for his 27 published books. Joseph is online at AncientAmerican.com.

“The question is no longer ‘Who discovered America?’ Thanks to Frank Joseph, the question is now, ‘Who didn’t discover America?’ “—David Goudsward, author, Ancient Stone Sites of New England and the Debate Over Early European Exploration

“Here is the history of ancient America you were never taught at school. Frank Joseph, drawing on decades of meticulous research and exploration, has uncovered the evidence that rewrites the history books. A vital addition to the library of anyone seeking knowledge of America’s forgotten past.”—David Jones, editor, New Dawn Magazine

By Susan Larison Danz, October 2013, on “Frontier Beyond Fear” show at BlogTalkRadio.com