PRACTICING MEDICINE WITHOUT a LICENSE? 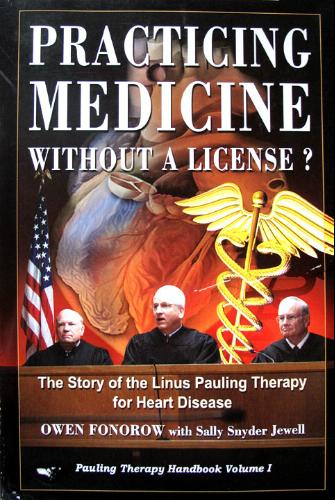 Linus Carl Pauling (1901-1994) was an American scientist, peace activist, author and educator. He is considered one of the most influential chemists of the 20th century and ranks among the most important scientists in history. Pauling was one of the first scientists to work in the fields of quantum chemistry, molecular biology and orthomolecular medicine. He is also a member of a small group of individuals who have been awarded more than one Nobel Prize, one of only two people to receive them in different fields (the other was Marie Curie) and the only person in that group to have been awarded each of his prizes without having to share it with another recipient.

In 1989, this world-renowned scientist alerted his colleagues and the American public to the underlying causes of heart disease. Pauling said he thought he understood how to cure—and prevent—heart disease cheaply and effectively.

Now, Owen Fonorow, the founder of the non-profit Vitamin C Foundation, explains Pauling’s theories about heart disease and details the Linus Pauling treatment for coronary trouble in a new book entitled Practicing Medicine Without a License. The book contains numerous amazing testimonials from former heart patients who were willing to use their own names, a rarity in books of this type.

Pauling’s theory, called the “Vitamin C/Lp(a) Theory of Cardiovascular Disease,” constitutes one of the greatest breakthroughs of modern science. This remarkable theory—which includes the amazing claim that very low cost binding inhibitors can prevent and even dissolve arterial blockages—has gone unnoticed (suppressed) by the pharmaceutical industry, the medical profession and the mainstream media.

Find out for yourself what this brilliant scientist had to say about heart disease and how to perhaps improve your own health with his methods.

The liver produces more Lp(a) molecules in humans with chronically low intake of vitamin C. These numerous Lp(a) molecules have a tendency to deposit on top of existing plaque formations. Over time, the healing process overshoots and arteries narrow. The resulting reduction in blood flow introduces several dangers, including a greater likelihood that any blood clot will cut off the flow of blood entirely.