Lincoln’s War: The Real Cause, the Real Winner, the Real Loser

View cart “A CONFLICT of INTEREST” has been added to your cart. 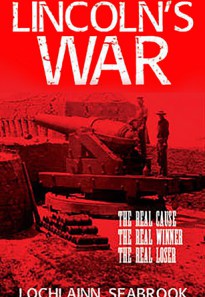 If you believe that the “North won” the Civil War and the “South lost,” or if you think that Abraham Lincoln was a conservative Republican who “freed the slaves” and that Jefferson Davis was a liberal Democrat who tried to “preserve slavery,” then you’ve been completely misled by the mainstream media and by our left-leaning education system.

Read the most important “Civil War” book in decades, Lincoln’s War: The Real Cause, the Real Winner, the Real Loser, by award-winning historian and Civil War scholar Col. Lochlainn Seabrook and learn the truth about the Great Conflict of 1861. This seminal work, the first ever to expose the authentic facts about Civil War-era Republicans and Democrats, the true origins of the war, and who really won and lost, will finally clarify the illogical and often confusing conventional view of the conflict.
Who could seriously believe, for example, that millions of men, women, and children (on both sides) risked their lives to destroy or save slavery? And who can honestly accept the idea that Lincoln was justified in killing hundreds of thousands of people and bankrupting the U.S. Treasury to “preserve the Union,” or that Davis purposefully turned 8 million Southerners into “traitors” to prove that secession was legal? No wonder the story of the liberal war on the Constitution has been incomprehensible—until now!
Thoroughly researched, historically accurate, and packed with hundreds of once suppressed eyewitness testimonies, Col. Seabrook’s richly illustrated, highly original work is the only one you’ll ever need for a total understanding of America’s bloody contest between conservatism and liberalism. Lincoln’s War, which includes extensive notes, a bibliography and an index, renders every mainstream history book obsolete, and is a must-read for any serious Civil War or history buff.
Softcover, 347 pages