FOR NOBODY’S EYES ONLY: Missing Government Files and Hidden Archives That Document the Truth Behind the Most Enduring Conspiracy Theories

View cart “PERFIDY: The Government Cabal That Knowingly Abandoned Our Prisoners of War and Left Them to Die (PDF)” has been added to your cart. 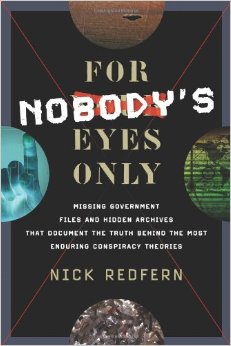 Under the terms of the Freedom of Information Act, government agencies have declassified millions of pages of documents on numerous subjects.

But there are other files, many of a far more intriguing nature than those the government has already released. They’re the ones that agencies haven’t released.

They include the files that supposedly can’t be found, that are suspiciously “missing,” as well as the top-secret papers that agencies admit exist but which they are determined to keep hidden from us.

The reason: to prevent the truth behind some of the biggest conspiracies of all time from ever surfacing.

For Nobody’s Eyes Only includes fascinating new information on:

For Nobody’s Eyes Only picks the locks to the secret vaults “they” don’t want any of us to see.