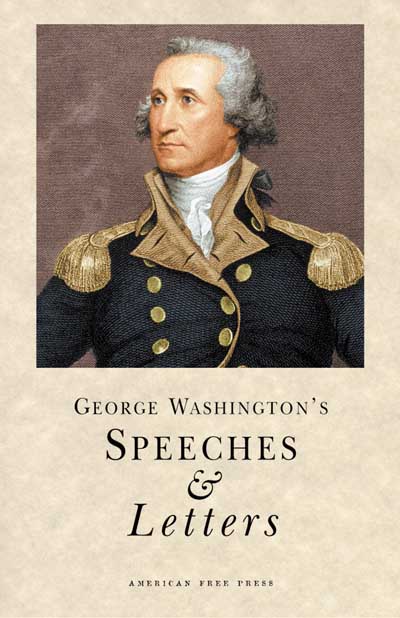 A fascinating and revealing look at America’s first president and war hero through the personal letters Washington wrote to colleagues and loved ones during the French & Indian War, the American Revolution, early nationhood and his presidency. Perhaps the most telling aspect of a man are those thoughts he pens for posterity. 19 of Washington’s letters and speeches re-set in easy-to-read type with a dozen illustrations accentuating key moments in Washing­ton’s life.

Inside George Washington’s Speeches & Letters you’ll  read Washington’s innermost thoughts as he quickly writes to his mother to soften the news of a British/American defeat at the hands of the French and her Indian allies in which Washington had two horses shot from beneath him and bullet holes in his uniform. It was during this battle that Braddock was killed and his top aides-de-camp wounded, thrusting Washington into his first command. Or read Washington’s letter to Congress begging for supplies, food, clothes and weapons for his army camped in Valley Forge during one of the coldest winters in 100 years. Or how about a letter from Washington to wife Martha informing her he would not be returning to her side for many months as he had been appointed commander-in-chief of the Continental Army. In this letter Washington expresses his regret for leaving her alone and informs her he has drafted a will . . . just in case.

There are many more letters plus several speeches including Washington’s classic Farewell Address which should be memorized by every U.S. congressman, judge and president.