Presstitutes: Embedded in the Pay of the CIA 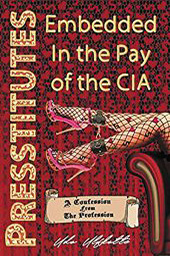 A Confession from the Profession

Udo Ulfkotte, a German journalist, reveals how he and his colleagues are corrupted and entrapped like modern-day Mockingbirds on the tentacles of paymaster CIA. The book became a bestseller in Germany–then Ulfkotte died in mysterious circumstances. A small U.S. publisher named “Tayen Lane” promised to publish an English edition here – but apparently never got as far as translating it. Tayen Lane , which looks to have been a print-on-demand vanity press, is now defunct. There was considerable speculation that the translation was suppressed by the powers that be, for instance, in the review in the Off-Guardian.

The original title translates to “Bought Journalists: How politicians, secret agencies, and high finance steer Germany’s mass media.” This is more accurate than “Embedded in the Pay of the CIA,” which is a quick caricature. There was no need to slip payoff envelopes to newsmen. They get the bribe in their regular paycheck. The entire system is not only bought, it was installed by the U.S. during the Occupation after WWII. Ulfkotte hammers away at the corruption of Elite Organizations and Media, which set the tone and the rules of the game for the puppets who pen their pieces of the program.

The eagerly awaited English edition of “Bought Journalists” was suppressed for three years under the title “Journalists for Hire”–and still got 24 five-star-only Amazon reviews from would-be readers. After 18 months on the bestseller list in Germany, now it’s finally here!

Ever get the feeling the media tries to manipulate or lie to you? You have plenty of company! And you are right–the facts are in. A world-class media insider has blown the whistle on what really goes on inside the media industry.

Author Udo Ulfkotte was a respected journalist for 17 years with Germany’s newspaper of record, the Frankfurter Allgemeine Zeitung. He begins this explosive exposé by first owning up to his own career, where he had to sell out to have the job. He then reveals the deceptive tricks and secret networks of power within the media. How perks are used to bribe journalists and opinion makers to twist their reporting. How the tone of corruption is set from the top–play along or quit. How the long arm of the NATO press office enrolls the media to get Europe to support more foreign wars.

Ulfkotte names hundreds of names and gives you a behind-the-scenes look at the organizations that influence the German media with one-sided propaganda, such as The Atlantic Bridge, Trilateral Commission, German Marshall Fund, CFR, and Aspen Institute. He unmasks the intelligence agencies behind these lobby groups and the propaganda techniques they use, such as U.S. Embassy grants for projects to influence European public opinion.

Would you be surprised to learn that spies sit and write articles in newspaper editorial offices, which are then published on op-ed pages under the names of well-known journalists? Or that journalists receive bribes for their reporting? Have you heard how prestigious “journalism prizes” are a reward system for cooperation, much as “Heroes of Labor” were honored for writing the best communist propaganda in the former East bloc? Seen from the inside, the difference between journalist and propagandist isn’t as far as you might like.

The elite owners of the media feel it’s their right to think for us, and to mold public opinion to their agendas. Their Freedom of the Press is Freedom to Censor the news.

Our nation depends on the media to understand our world, just as each one of us depends on our eyes and ears. The media are our senses. When they hide the truth, or lie to us, they put us all in danger.

A million people died in Iraq, Libya, and Syria because the press didn’t just report the news, didn’t just lie about the news, but they invented and sold the events that served as pretexts for wars. The author spent years in the Middle East, surviving an attack with chemical weapons supplied by U.S. and German firms.

This book is a veteran’s guide to the media spider’s web. It shows how the system works, sharpens your common-sense skepticism, and increases your immunity to the controlled media’s attempts to do our thinking for us.

You will gain a whole new perspective on media reports. A good idea of how much you can believe the news on TV or the radio: almost nothing. Ulfkotte dissects the German media establishment, which media outlets are owned by political parties, the journalists that are under their influence, and what keeps them there. You will see how whole countries are manipulated – and who is pulling the strings and why. Here is the bad news about the news: Our idea of a free press with a broad spectrum of opinion is pure fantasy. Very often, what is called the “news” is simply brainwashing.

What follows is an introduction for Anglophone readers of GEKAUFTE JOURNALISTEN (BOUGHT JOURNALISTS) by Udo Ulfkotte, in the absence from public view of the “official” translation.

Alerted by James Tracy’s piece in Off-guardian.org on 8 January 2018, which mooted the apparent suppression by powerful background forces of an English translation of Udo Ulfkotte’s exposé of German media manipulation, I obtained a copy of the German version of Gekaufte Journalisten in order to check for myself whether this work is a credible critique which merits exposure outside Germany. (NOTE: a web link was given by one reader to an online version of the German text; but that text does not provide the 500 endnotes.)

Here, as a first pass, I present in English, first the complete Contents, and then a summary of the Foreword, with web links to some of the material cited by Ulfkotte. This is clearly fair dealing under copyright law. I have not seen the “official” English translation, so clearly have not plagiarised it.

IS ACTIVE SUPPRESSION IN PLAY HERE?

An English translation of the full title of the work reads: Bought Journalists: how politicians, secret agencies and high finance steer Germany’s mass media. First published just over three years ago, it is still available from the publisher www.kopp-verlag.de. My copy shows the title went through four printings in the two months after publication in October 2014. It is flagged by the publisher as a ‘Spiegel bestseller’.

Is there a clear reason why a best-seller in German on a topic of deep concern to many Anglophone readers would not also sell well in an English edition? …