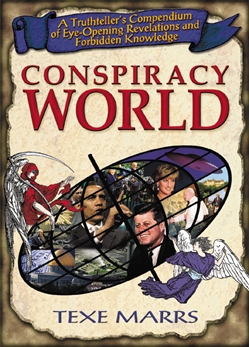 From time immemorial wicked and deceitful men and women have conspired to do evil things and to advance their own lustful agendas. This is not “conspiracy theory,” it is real history. It began in heaven millennia ago when Lucifer conspired with one-third of the angels, foolishly attempting to overthrow God. Then, banished to earth, he conspired with Eve and Adam in a plot to disobey God and become “as gods.”

Throughout the ages, conspiracies continued unabated. Rome’s Julius Caesar was murdered in the Senate, and one of the chief conspirators was his own friend, Brutus. Jesus Christ was also victim of a murderous conspiracy, and, likewise, one of his own disciples, Judas, plotted against and betrayed him.

More recently, we have seen Marxist terrorists Lenin and Trotsky conspire with western bankers and Rothschild agents in a successful revolution to seize power in Soviet Russia. Some 66 million innocents perished as a result. Next door, another Communist butcher, Mao Tse Tung, conspired with associates and grabbed hold of China’s vast territories. Seventy-eight million more died and tens of millions more were tortured and imprisoned.

Conspiracies Are Real— And Often Bloody

Yes, conspiracies are real—and often bloody. Planet earth is truly a Conspiracy World. That’s why I am pleased to title my book, Conspiracy World—A Truthtellers Compendium of Eye-Opening Revelations and Forbidden Knowledge. This big, new book is packed with a massive 137 different articles, all originally published in my Power of Prophecy newsletters.

The topics covered in this book are as timely as today’s news and cover a sizzling multitude of conspiracies, scandals, investigations, and coverups. Never before have so many eye-opening secrets and disclosures been published in a single volume.

Here is just a sampling:

In Conspiracy World, the reader will discover that Texe Marrs and Power of Prophecy have often amazingly predicted events far in advance. For example, in the exclusive investigative exposé, “The Mysterious Riddle of Chandra Levy,” I predicted that the remains of the missing congressional intern would be found at Rock Creek Park in Washington, D.C. I explained that this isolated park is laid out as a goat’s head and is the scene of many gruesome Satanic rituals celebrated by some of America’s top politicians—federal judges, Senators, diplomats, and White House personnel.

In fact, it was Rock Creek Park where Chandra Levy’s bones were eventually discovered. How did I know this months in advance? I cover that and more in Conspiracy World.

Again and again—thanks be to God—I have astonishingly been on target in revealing hidden facts about conspiratorial events, including the truth about the assassinations of Great Britain’s beloved Princess Diana and New York’s charismatic John F. Kennedy, Jr. Also unmasked in Conspiracy World: the real reason for the anthrax murders; the heinous genocide of millions of Christians in Armenia; the unspeakable crimes committed by Jews who ran concentration camps after World War II; the monstrous atrocities perpetrated in the Soviet Gulag; and the strange conspiracy described in The Report From Iron Mountain.

, the author contends that missing intern Chandra Levy had been murdered during a gruesome satanic ritual and that her remains would be found in Washington, D.C.’s Rock Creek Park.

You and I are Conspiracy Scientists

It has been my great pleasure to put this book together and include in it the highlights of my investigative work for so many years. This is definitely a book that should be read and in the library of everyone who is a conspiracy scientist. After all, that’s what you and I are: conspiracy scientists!

What you will find in Conspiracy World is certainly sensational and often shocking as well. But it is a documented book brimming with facts and evidence. I’m not interested one whit in “conspiracy theory,” I want to know the cold, hard facts. I’m sure you feel exactly the same. So I say, let the doubters and skeptics wallow in their ignorance, even as we search for and discover truth.

You and I are, indeed, conspiracy scientists, and I praise God for his goodness in magnificently providing us the knowledge we need to survive these perilous times.