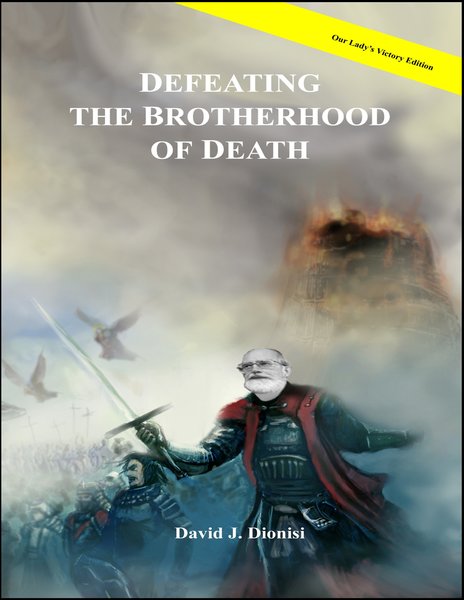 DEFEATING the BROTHERHOOD of DEATH

Is an international banking cabal pushing a plan for world government? If so, are they just hungry for absolute power? Or is there an ideological or even pseudo-religious basis for their global domination project?

Defeating the Brotherhood of Death by David Dionisi is not just about the Third Secret of Fatima. It can help you understand what people perceive as supernatural events, for instance, why Pope Francis was influenced by a prophetic event in May 2014, and why the third extraordinary jubilee in the history of the Catholic Church is ending on November 20, 2016.

This book also provides overwhelming concrete evidence that interlocking secret societies seek a third world war to help establish a New World Order. And if you doubt that, take a look at U.S. foreign policy today, which seems designed to foment a major conflict between the most militarily powerful nations on the planet.

Dionisi, a former U.S. Army intelligence officer, argues that at the top of the New World Order power pyramid is The Brotherhood of Death—a dark “religious” cult with roots in ancient Egypt and Babylon. The Brotherhood of Death, which dominates the highest levels of freemasonry, worships big lies and human sacrifice and believes that wealth and slaves amassed in this life will accompany their owner to the next world, making him a sort of immortal god. The Brotherhood loathes traditional religions, especially the Abrahamic monotheisms; the real purpose of the phony “war on terror,” according to Dionisi, is to turn Christians, Muslims and Jews against each other so that monotheism destroys itself.

But this is not a book that is all bad news. Dionisi is surprisingly optimistic about our chances for prevailing against these dark forces.