View cart “Mind Control: HAARP & the Future of Technology” has been added to your cart. 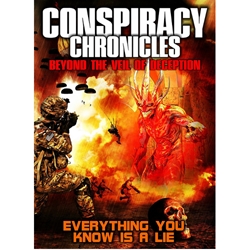 Conspiracy Chronicles: Beyond The Veil Of Deception

The term New World Order or NWO, refers to the emergence of a totalitarian world government. A theory that experts say is now a modern day reality. The New World Order is a secretive, power elite with a globalist agenda conspiring to rule the world through an authoritarian agenda. An agenda that has now infiltrated practically every aspect of our daily lives. From media to social devices, the barrage of information and electronic control over our every move has reached staggering levels. Now is the time to wake up, now is the time to take back control of our lives. Experience three unique exposes on the subject and decide for yourself. Conspiracy Planet: Examine the motivations behind the centuries old nefarious war for control that has been in motion since the dawn of recorded history. View the evidence that Earth is a prison planet being controlled by outside forces far beyond our understanding. The Indigo Man: Jason was born with exceptional multi-dimensional abilities, and at an early age he was deemed an Indigo Child. He claims that in truth Technically we are all Extraterrestrials. A fascinating account of the strange and unusual events in one man’s journey. Mind Control Experiments: At the end of the Second World War the United States government (under Operation Paperclip) extracted Nazi scientists from Germany. This is the story of a very black, covert government project that continues to this day.