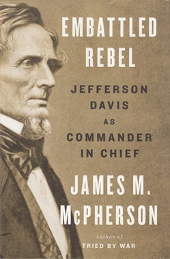 On February 10, 1861, Jefferson Davis and his wife, Varina, were taking rose cuttings in their garden at Brierfield, the Davis plantation on the rich bottomland along a looping bend in the Mississippi River. Three weeks earlier, just recovered from an illness that had kept him in bed for several days, Davis had resigned his seat in the U.S. Senate when he received official word of Mississippi’s secession from the Union. He and his family had made their way home slowly, stopping on January 28 at the state capital in Jackson, where Davis learned that he had been named major general of the Army of Mississippi. It was a position congenial to his desires. As a graduate of West Point, an officer in the regular army for seven years, commander of a volunteer regiment in the Mexican American War, secretary of war in the Franklin Pierce administration, and chairman of the Senate Committee on Military Affairs, Davis had vast and varied military experience qualifying him for such a position. He immediately set to work to reorganize and expand the state militia to meet a potential invasion threat from the U.S. Army. Davis also anticipated the possibility that the convention of delegates from six seceded states meeting in Montgomery, Alabama, might choose him as general in chief of the soon-to-be-created army of the Confederate States of America. But for now he was careworn and exhausted. He wanted only to get home to restore his health and energy, supervise his 113 slaves as they prepared Brierfield for the year’s cotton planting, and relax by working in his flower and vegetable gardens.

While Jefferson and Varina were taking rose cuttings that pleasant February day, a special messenger arrived from Vicksburg. He handed Davis a telegram. Varina watched her husband as he opened and read it. His face blanched, she recalled. “After a few minutes’ painful silence” he told her “as a man might speak of a sentence of death” that the convention at Montgomery had unanimously elected him provisional president of the Confederacy—not general-in-chief, but commander in chief, with all of its political as well as military responsibilities and vexations. He did not want the job.

He had expected it to go to Howell Cobb of Georgia. But the convention, anticipating the possibility of war with the United States, had chosen Davis in considerable part because of his military qualifications, which none of the other leading candidates possessed. Despite his misgivings, Davis’s strong sense of duty compelled him to accept the call. He prepared to leave for Montgomery the next day.