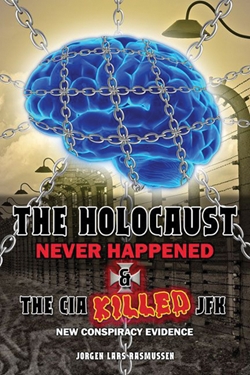 23 in stock (can be backordered)

The critical information available in this book destroys the hoax of the 6 million Jewish victims of Nazi Germany and exposes the enormous cover-up involved in the Warren Commission Report on the assassination of the 35th President of the United States, John F. Kennedy.

This volume confirms the involvement of hundreds of individuals and several government agencies in the assassination. The 95+ selective photos and illustrations visually enrich the stories.

The publisher, Jon Larsen Shudlick, a former Army chief investigator and popular Florida radio DJ has endorsed the book. In The Holocaust Never Happened and the CIA Killed Kennedy author Jorgen Lars Rasmussen, a World War II veteran, brings to light empirical evidence never before written about the bizarre circumstances surrounding theU.S. government and its unnecessary entry into its many wars of the last 100 years and LOTS MORE.

The Sinking of the Lusitania, 1915

Why is America Now Under Attack?

The Murder of Mary Pinchot Meyer

Some Communist Rules for the Destruction of the United States

Where the Number Six Million Originated

Audit of the Federal Reserve Reveals $16 Trillion in Secret Bailouts

World’s Best Countries to the Born In For 2013

The Fiscall Cliff: A Diversion

Was There Really a Holocaust?

What About Real Holocausts?

Media Lists and Recommended Reading – How do we learn more about conspiracies and what the truth really is?