HISTORIC DOUBTS on the LIFE and REIGN of KING RICHARD III 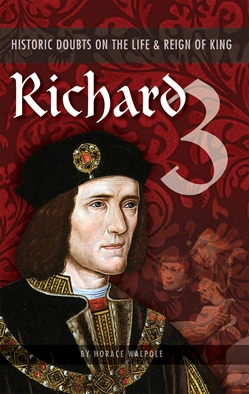 In 1787, amateur historian and well-known British writer Horace Walpole, a former Member of Parliament, penned a book questioning the black portrayal of King Richard III. The outrageous accusations against the maligned king—who became the subject of a fanciful Shakespearean propaganda play—were dealt with one by one, like a barrister defending his client. Myths of Richard’s grotesque physical appearance to accusations he murdered his nephews, his wife, his brother and several members of the English court are refuted with common sense and a little real investigative work. What we are left with in Walpole’s biography is a picture of man quite at odds with the one history has insisted on presenting us with for hundreds of years.

As you will also see in this updated edition of Walpole’s book—with a new introduction by Revisionist historian John Tiffany that brings us up to date on the recent skeletal remains that have helped reveal the real Richard—is a more accurate portrayal of the king who has been entombed in the annals of history as one of the darkest characters of the medieval period—if not the entirety of world history. Did he kill “the Princes in the Tower”? Was he a brutal, deformed monster and a despotic tyrant?