True Story of the Bilderberg Group 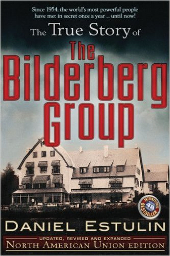 Delving into a world once shrouded in complete mystery and impenetrable security, this investigative report provides a fascinating account of the annual meetings of the world’s most powerful people—the Bilderberg Group. Since its inception in 1954 at the Bilderberg Hotel in the small Dutch town of Oosterbeek, the Bilderberg Group has been comprised of European prime ministers, American presidents, and the wealthiest CEOs of the world, all coming together to discuss the economic and political future of humanity. The working press has never been allowed to attend, nor have statements ever been released on the attendees’ conclusions or discussions, which have ramifications on the citizens of the world. Using methods that resemble the spy tactics of the Cold War—and in several instances putting his own life on the line—the author did what no one else has managed to achieve: he learned what was being said behind the closed doors of the opulent hotels and has made it available to the public. This second edition includes an entirely new chapter and updated information on topics such as an earlier attempt to break up Canada and the portents of a North American union.

Daniel Estulin is an award-winning investigative journalist and has been researching the Bilderberg Group for more than 14 years. He is the host of two radio shows in Spain.