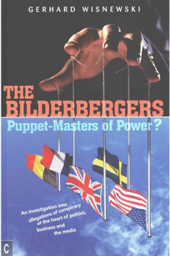 The Bilderbergers: Puppet-Masters of Power?

The Bilderbergers: Puppet-Masters of Power? An Investigation into Claims of Conspiracy at the Heart of Politics, Business, and the Media

Since 1954, a discrete and select group of wealthy and powerful individuals have attended a private, yearly conference to discuss matters of their choosing. This group represents European and North American elites, as well as new talent and rising stars, from the worlds of politics, business, media, academia, the military and even royalty, and has included household names such as Margaret Thatcher, Henry Kissinger, and Prince Philip. In recent years, their numbers have featured David Cameron, Tony Blair, Angela Merkel, Bill Clinton, and David Rockefeller. They are “the Bilderbergers,” named for the hotel where their secret gatherings were first hosted.

Investigative writer Gerhard Wisnewski explores the numerous claims of conspiracy that swirl around the group, revealing names of participants, their agendas, and their goals. The scene opens in the sun-kissed seaside resort of Vouliagmeni, Greece, where Wisnewski tries to observe and report on a Bilderberg conference. He soon attracts aggressive, unwanted attention from police and undercover security, and it is made abundantly clear he is not welcome. From this rude introduction, Wisnewski works backward to the founding of the Bilderbergers in 1954 by a shadowy Jesuit with secret service allegiances. Examining records and hidden reports, the author uncovers the true history of the organization, alliances among key individuals, and their common interests.

Tracking Down the Bilderbergers

The Dorint Sofitel beside Lake Tegemsee

All’s quiet at the Bilderberg summit

A non-contact office at Leiden

The conspiracy of silence

‘Look out for three sozzled Americans!’ – In the hornets’ nest of the Bilderbergers

14.5.09: The hunt for Rockefeller’s swimming trunks

16.5.09: The transparent hornets’ nest of the Bilderbergers

17.5.09: Writing and thinking undesirable – a pleasant chat by the wayside

A conspirator founds the Bilderbergers

The most important characteristics of a monk

Behind a thousand masks

In the morass of ‘conspiracy theories’

The keyboard of cultures

Monita secreta – the secret instructions of the Jesuits

The path to world domination

Uniting the states of America

Uniting the states of Europe

The confidential reports of the Bilderbergers

The rest of the world

Excursus: The ‘Council on Foreign Invasions’

A strategist for Europe

The ‘prince of darkness’

Wolfensohn, son of a wolf

The proprietors of Sweden

The silence of the Bilderbergers

The rise of Guido W.

Chancellors by grace of Bilderberger

‘One can’t not communicate’

The case of Rühe and Scharping

TC – The expansion of the Bilderbergers

If not corruptible, then perhaps forgetful?

A global government or not?

A form of conspiracy

A form of government

Excursus: Barack and the Bilderbergers

‘Motive, means and opportunity’ – legal action against the Bilderbergers

Power to the philanthropists

An attack on the structure of the globe

A regimen of crises

Away with the boundary

The mightiest conspiracy on the planet