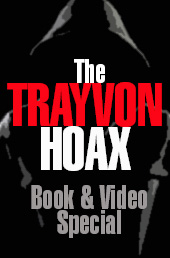 Purchase The Trayvon Hoax: Unmasking the Witness Fraud That Divided America book and DVD together and save $6!

Gilbert’s painstaking research takes him through the high schools of Miami, into the back alleys of Little Haiti, and to finally to Florida State University where he finds Trayvon’s real girlfriend, the real phone witness, Diamond Eugene. Gilbert confirms his revelations with forensic handwriting analysis and DNA testing. Read more details here.