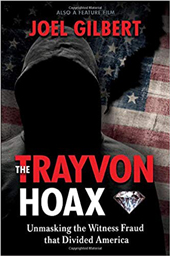 Gilbert’s painstaking research takes him through the high schools of Miami, into the back alleys of Little Haiti, and to finally to Florida State University where he finds Trayvon’s real girlfriend, the real phone witness, Diamond Eugene. Gilbert confirms his revelations with forensic handwriting analysis and DNA testing.

In the process, he exposes in detail the most consequential hoax in recent American judicial history, The Trayvon Hoax, that was ground zero for the downward spiral of race relations in America.

This incredible book has the potential to correct American history and bring America back together again.

Joel Gilbert is a documentary film maker based in Los Angeles and president of Highway 61 Entertainment. Gilbert is also a political commentator and foreign policy analyst. He has produced documentary feature films on Barack Obama, Dreams from My Real Father (2012), American politics, There’s No Place Like Utopia (2014) and Donald Trump, Trump: The Art of the Insult (2018). He has also produced films on Middle East politics including Farewell Israel (2008) and Atomic Jihad (2010). Gilbert’s other films cover music icons Bob Dylan, Inside Bob Dylan’s Jesus Years (2010) as well as comedies on Paul McCartney and Elvis Presley. More at Thetrayvonhoax.com.

AS A FILMMAKER, I did not set out to write a book. I set out to produce a documentary about the rise of Florida politico Andrew Gillum. Even after I thought a book would be useful, I certainly did not expect to write this book. But I have done so, along with a documentary feature film of the same name. The more I looked into Gillum’s success, however, the more need I saw to investigate the unanswered questions of the criminal case upon which Gillum built his career. I had followed the 2012 shooting death of seventeen-year-old Trayvon Martin and the subsequent trial of George Zimmerman from afar and, like many others, I had grave concerns about the lynch mob mentality that drove the case. The shooting and trial took place in Sanford, Florida. I intended to visit Sanford, but this investigation took me places I never expected to go. From the back alleys of Little Haiti in Miami to the bucolic campus of Florida State University in Tallahassee, I got an earful and an eyeful. I met George Zimmerman as I had hoped to, but I ended up centering both the documentary and this book on a young woman I did not even know existed when I started the project. … Click to Continue Reading Prologue.