The RULING ELITE: A Study in Imperialism, Genocide and Emancipation

Lincoln’s war, the North’s attack on the South, took the life of 622,000 citizens and altered the government’s structure. Marx and Engels watched the war from afar and applauded his efforts. The media and our government-controlled schools have presented a deceptive view of every historical event and have whitewashed the most scandalous political leaders and vilified leaders who have worked in the best interests of the people. Following Lincoln’s precedent-setting war, we have been repeatedly lied into wars.

Currently, our young men and women shed their blood in foreign lands while well-connected corporations make massive profits rebuilding the infrastructure that other corporations have demolished. Meanwhile, our politicians, possessing inside knowledge, grow richer through their investments and the bribes they accept from deep-pocketed lobbyists. They have not listened to their constituents for decades.

If you are one of those truth seekers who has an open mind and is ready to absorb and digest new ideas and different approaches to the problems facing our world today, Deanna Spingola’s remarkable first book, The Ruling Elite: A Study in Imperialism, Genocide and Emancipation is one volume you absolutely must add to your reading list.

She is undeniably one of the brightest, most energetic voices speaking out today.

As one caller to Deanna’s program once told her: “You rearrange the furniture in my head and make me think.” And that’s exactly what Deanna’s new book does. It will make you think—and re-think—what you think you know about a lot of things. The Ruling Elite genuinely stands out, because it contains so much unique analysis presenting an entirely new light on personalities and events of history that have been misrepresented or misunderstood, not only by the corrupt mainstream media but also unfortunately—in most cases, unwittingly—by even the independent “truth” media.

Meticulously documented in 669 fact-filled pages with 1,998 footnotes, referenced from an amazingly diverse variety of sources, and complete with an index, The Ruling Elite will be an important part of your personal research library for years to come.

War, slavery, genocide, plutocracy and imperialism—the results of rampant, untrammeled capitalism benefiting an elite few at the top to the distress of millions of people of all races—are the focus of this monumental historical study. In many respects, this is an “alternative” history of the United States and the American system that is unlike anything you’ve ever before encountered.

Here are just some of the thought-provoking questions posed and addressed in Deanna’s book—and the answers she provides will leave you reeling:

And anyone who admires the media- manufactured “memory” of Abraham Lincoln will find Deanna’s exposition of Lincoln’s history, his connections and his intrigue quite unsettling. She also explores some little-known aspects surrounding Lincoln’s assassination—facts that the Lincoln-worshipping mass media conveniently ignores.

Deanna is an uncompromising opponent of the international slave system that took hold in the Americas. She outlines the origins of the slave trade and names the big names who profited from the trade. There is much more to the controversy over slavery and its institution in the new world than meets the eye—and Deanna lays it all out in no uncertain terms, drawing the links to the global opium trade, the Rothschild banking empire and wars of conquest. 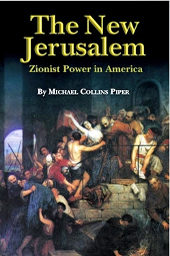 911 MADE in ISRAEL: The Plot Against America

After co-hosting The Victor Thorn Show on the Reality Radio Network from 2002-2003, in February 2004 he co-founded WING TV (World Independent News Group), a daily Internet television and radio talk show viewed in over 100 countries worldwide. In addition, he was a weekly investigative reporter for American Free Press from 2007 until his death in 2016, while serving as AFP’s assignment editor in 2011.