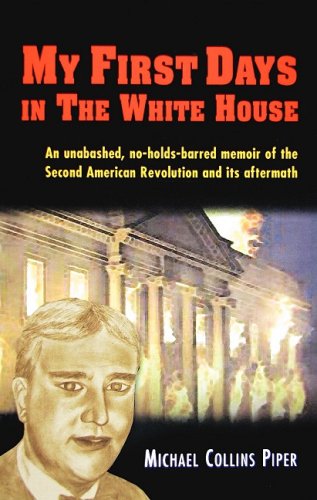 90 in stock (can be backordered)

Imagine folks if that headline ever came true. Surely you’ve thought about what YOU might do if YOU were ever elected president. For 25 years Michael Collins Piper has been writing and lecturing about the problems that plague America and the world. Now, in this, his first-ever work of fiction, Piper describes—in a colorful and memorable retrospective narrative—the circumstances as to how he became President in 2008 and what would happen as a consequence. This first-ever Piper work of fiction is called . . .

MY FIRST DAYS IN THE WHITE HOUSE: An Unabashed, No-Holds-Barred Memoir of the Second American Revolution and its Aftermath

Although the narrative outlined in MY FIRST DAYS IN THE WHITE HOUSE clearly is fiction, the book actually includes much important (and often-suppressed) historical data about American and world affairs up until the year 2008. However, author Michael Collins Piper also includes some factual reminiscences about his remarkable personal conferences with a number of world leaders and his often-amusing encounters in Washington with leading American political figures in which Piper dared to dress them down. Including:

All of this & more! • The Bush-neocon attack on Iran • The military goes into open rebellion • The fall of the Bush regime • The new Piper administration • A cabinet that served the people • Punishing the war criminals • Punishing the media collaborators • The last days of Israel • The collapse of Zionist power • Revolution sweeps the West • Dismantling the Rothschild Empire • Bringing the plutocratic parasites to heel • A solution to the Federal Reserve monopoly • Resolving the immigration problem