View cart “114: UNCUT and UNCENSORED—The 114 Most Important Suppressed Stories That Didn’t Make It On Your Nightly News” has been added to your cart. 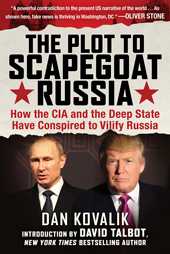 An in-depth look at the decades-long effort to escalate hostilities with Russia and what it portends for the future. By Dan Kovalik, introduction by David Talbot.

Since 1945, the U.S. has justified numerous wars, interventions, and military build-ups based on the pretext of the Russian Red Menace, even after the Soviet Union collapsed at the end of 1991 and Russia stopped being Red. In fact, the two biggest post-war American conflicts, the Korean and Vietnam wars, were not, as has been frequently claimed, about stopping Soviet expansion, but about maintaining old colonial relationships. Similarly, many lesser interventions and conflicts, such as those in Latin America, were also based upon an alleged Soviet threat, which was greatly nonexistent. And now the specter of a Russian Menace has been raised again in the wake of Donald Trump’s election.

The Plot to Scapegoat Russia examines the recent proliferation of stories, usually from American state actors, manipulating the threat of Russia, and the long history of which this episode is but the latest chapter. It will show readers: 1) the ways in which the U.S. has needlessly provoked Russia, thereby squandering hopes for peace and cooperation; and 2) how Americans have lost out from this missed opportunity, and from decades of conflicts based upon false premises. The Plot to Scapegoat Russia is one of the timeliest reads of 2017.

“A powerful contradiction to the present US narrative of the world . . . As shown here, fake news is thriving in Washington, DC.”–Oliver Stone, Academy Award winning director and screenwriter

“The Plot to Scapegoat Russia is a beautifully written, uncommonly coherent, and very compellingtreatise on the issues facing America today… a troubling indictment of where we’ve been and where we’re headed. Moreover, this book is profoundly important, and a timely retrospective review of American foreign policy misadventures since the advent of the Cold War.”–Phillip F. Nelson, author of LBJ: The Mastermind of the JFK Assassination and LBJ: From Mastermind to “The Colossus”

“The Plot to Scapegoat Russia underscores how the CIA’s infiltration and shaping of the media, which began in the 1950s, successfully continues today. A very worthwhile account for anyone who wants to understand how ‘reality’ is manufactured, while ‘real truth’ is murdered and buried.”–Peter Janney, author of Mary’s Mosaic: The CIA Conspiracy to Murder John F. Kennedy, Mary Pinchot Meyer, and Their Vision for World Peace

“At a time when the U.S. military budget is again soaring to enrich the oligarchs, this timely and thought-provoking book turns Orwellian ‘double-think’ on its head in a cogent analysis of what’s really behind all the saber-rattling against Russia. In a scholarly but also deeply personal and fluidly written work, Dan Kovalik pulls no punches in dissecting the history of how America has justified its own imperialistic aims through the Cold War era and right up to the current anti-Putin hysteria.”–Dick Russell, New York Times bestselling author of Horsemen of the Apocalypse: The Men Who Are Destroying Life on Earth and What It Means to Our Children

“The Plot to Scapegoat Russia confronts the timeliest of subjects, the effort to resuscitate the Cold War by blaming Russian president Vladimir Putin for interfering in the 2016 presidential campaign on behalf of Donald Trump, an effort pursued by CIA and the Democratic Party working in tandem. Kovalik establishes… that not a scintilla of evidence has emerged to grant credibility to this self-serving fantasy… [and he] deftly eviscerates the mainstream press. Reading [this book] will be salutary, illuminating and more than instructive.”–Joan Mellen, author of Faustian Bargains: Lyndon Johnson and Mac Wallace in the Robber Baron Culture of Texas

Attorney Dan Kovalik has written an extremely important book that challenges the current media/political focus on “Russia-gate” and warns that dark forces of war are taking us in an ever more dangerous direction. The book, released just a few weeks ago, has received high praise from numerous writers.

In his foreword to the book, best selling author David Talbot says:

“The US war machine has revived the tried and true Red Scare…. This massive anti-Russian propaganda campaign is one of the biggest fake news operations in U.S. history…. Unlike our war-obsessed media, human rights lawyer Dan Kovalik does understand that peace and diplomacy are in the best interests of the American and Russian peoples. His book is an urgently needed counterassault against the propaganda forces that are trying to push us over a precipice that it too terrifying to even contemplate. It’s time for all of us to speak truth to power before it’s too late.”

Talbot’s warning is not hyperbole. As I write this review, the US military is pushing ever closer to direct military confrontation with Syria, Iran, and Russia in Syria.

The book is entertaining reading because Kovalik combines his personal evolution with facts and history. He grew up as a conservative Roman Catholic fearful and wary of communism and the Soviet Union. He describes how his beliefs and assumptions were challenged when he traveled in Latin America. The first hand experience led to more reading and research which resulted in the shocking realization that the U.S. government has been behind coups and military dictatorships from Indonesia to Iran, Guatemala, El Salvador, Brazil, Paraguay, Chile, and more.

The author discusses US foreign policy since World War 2, before and after the collapse of the Soviet Union. He puts the current “new” Cold War in historical context and reviews the facts behind the current media / political focus on “Russia-gate.” He concludes that we are being blinded with baseless Russo-phobia while forces pushing for more American war and aggression are going unchallenged and recklessly threatening a war which could engulf us all.

Kovalik describes his own youthful belief in “American Exceptionalism” whereby our policies and actions are believed to be uniquely good and well meaning. For the author, that belief was confronted by a very different reality when he traveled to Central America in the 1980s. There he saw the reality of US funded “Contras” terrorizing Nicaraguan villagers. There he learned of the four Catholic nuns murdered by the Salvadoran military, which our government was supporting.

Relevant but not widely known historical facts are reviewed:

* the broken promises to Gorbachev

* the expansion of NATO right up to the Russian border

The author presents the case that the real threat to democracy is not coming from Russia, it is coming from our own political system and the forces which benefit from and which promote war and aggression. Former President Jimmy Carter has said the US is an “oligarchy with unlimited political bribery.”

Kovalik reviews the history of CIA and other intelligence agency whistle-blowers. He concludes that “The CIA is not a reliable source and poses a much greater threat to US democracy than Russia ever could.” The CIA wants Trump to stay on the path of confrontation with Russia.  There is a long history to conflict between the CIA and presidents seeking to promote peace. President John Kennedy had such fierce conflict with the CIA that he said he wanted to “break it into a thousand pieces and scatter to the wind.”

Kovalik presents a persuasive case that the demonization of Russia and Putin is being used to justify war and more conflict with ever increasing military budget. Instead of a “peace dividend,” the old Cold War led to ever greater US intervention abroad. The new Cold War is raising the risk of a direct confrontation and possible nuclear war. Most Americans do not want another war. Why are we headed down that slippery slope? This book goes a long way to explaining why.

Rick Sterling is an investigative journalist. He lives in the SF Bay Area and can be reached at [email protected]