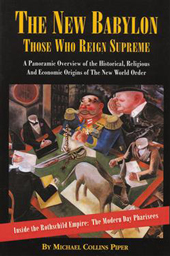 While there is much discussion today about a concept known as “The New World Order” (NWO), the pathetic fact remains that most of those doing the talking about the NWO refuse—and adamantly so—to address its real origins, its real nature.

Over the years there has been quite a bit of material published that points in the direction of what the NWO constitutes and it is the purpose of this volume to assimilate and assemble that material which correctly describes the NWO and the philosophy upon which it is founded.

There is an extraordinary amount of misinformation and deliberate dis-information about the NWO that is floating about today, much of it on the ever-increasingly influential Internet.

Unfortunately, much of this thoroughly fallacious material is being promulgated by self-styled “patriots” who ignore or suppress the uncomfortable, cold, hard truth that the origins of the NWO are found in the series of Jewish religious commentaries known as the Talmud, an often vile occult work that is the basis of Jewish religious thinking today, just as it was when it first emerged during the Jewish “captivity” in Babylon.

World conquest is the ultimate aim. Our America, the blood of its young people and our national treasure, are being used to advance that agenda through imperial wars that have ushered in an era in which mankind could face a nuclear Holocaust. Our purpose here is to delineate the philosophical foundations of the NWO as it is being instituted, as those who desire a NWO would have it set in place.

The origins of the NWO are indubitably clear and the forces that are bringing this NWO into being are readily apparent. Its proponents have very real faces and names. These modern-day Pharisees are not hidden behind obscure, impossible-to-pinpoint entities such as “The Illuminati” or a “German death cult,” as some would have us believe.

The NWO forces have coalesced around the international empire of the Rothschild Dynasty whose tentacles now reach into the highest levels of the American system. The NWO is real and this is what it is all about. I am personally indebted to all those who came before me in exploring this troublesome topic in no uncertain terms. I hope I have done their work justice in mine.

Chapter Five:
The Reign of the House of Rothschild:
The Framework for a Global Jewish Imperium … 119

Chapter Six:
The City of London:
The Jewel of Rothschild’s Imperial Crown … 145

Chapter Seven:
America: First a Colony, Then the Engine of Power … 157

Chapter Eight:
Yes, The Jews Do Control the Media … 177

Chapter Eleven:
The “Dukes and Duchesses” of the Rothschilds’ American Court
The Thirty Most Powerful Jewish Families … 203

Chapter Twelve:
The “Lords and Ladies” of the American Jewish Aristocracy
The Third Tier of the Rothschilds’ Court Families … 221

Conclusion:
Will the House of David Reign Supreme? … 257

Other Books of Interest:
The Works of Michael Collins Piper … 267

To understand what it is happening in our world today requires one to recognize there is a problem in the first place. Many do not. However, to pinpoint the source of the problem becomes a problem itself, since the media and academia (from which we seek knowledge) are controlled by those forces that are the problem. In addition, we are confronted with the sad fact that even many good people who are attempting to direct attention to the problem do not understand the big picture.

The truth is that an entire encyclopedia could be assembled on the Rothschild Dynasty and its impact on the course of history, of its manipulation of virtually ever y nation on the planet, of its parasitic exploitation of finance and industry, of its pernicious influence over the media, academia and other means of shaping public opinion for more than 200 years.

The purpose of this volume is not to bring forth yet another history of the Rothschilds. There have been many books on that topic, outlining many of that dynasty’s intrigues, its interplay with European royalty and aristocracy, amazing tales of the vast wealth of this family and its elegant palaces and remarkable collections of art and literature, of its extraordinary global reach.

The Rothschild family are the “Kings of Kings”—if only by virtue of their immense wealth. And they are, beyond doubt, the royal family of Jewry. It is thus no coincidence that on Jan. 2, 2009, Moses L. Pava, a Jewish professor of business ethics, admitted candidly in the Jewish newspaper, Forward, that, “Our Jewish communities, which once honored rabbis and scholars, now almost exclusively honor those with the biggest bank accounts.” And those with the biggest bank accounts are the Rothschilds.

Although, in the pages of The New Babylon, we will focus on the Rothschild Dynasty, we must say at the outset that if there were not even a single Rothschild still living today, the name “Rothschild” would still symbolize a particular force, a phenomenon that reaches far beyond one family.

But to understand the concept of what is commonly referred to as “The New World Order”—the idea of a “one world” or “global” government—we must acknowledge these critical factors:

In The New Babylon: Those Who Reign Supreme — A Panoramic Overview of the Historical, Religious and Economic Origins of the New World Order we will explore all of this, and much more. We will examine in detail the key players—the New Pharisees—acting as satellites of the Rothschild Dynasty, most importantly on American shores, acting to advance The Jewish Utopia.

Now, we want to emphasize that we do not suggest that “the Rothschilds” or “the Jews” or “the Zionists” are in complete control of the mechanism of power in our world today. However, their level of influence is so substantial that they can, in a sense, be referred to as the fulcrum upon which the balance of modern power rests: Every day they are working relentlessly to make certain that, in the end, they do achieve absolute power.

There are still forces, even at high levels, resisting The Jewish Utopia. However, there are many non-Jewish powers that have come to accept the Jewish influence as a reality that must be dealt with. These elements have thus surrendered and allow their own desire for power to dictate their cooperation with the New World Order, hoping, we presume, to be granted a few crumbs when The Jewish Utopia comes into being.

But they are fooling themselves, for they fail to understand the philosophical intentions of the New World Order so clearly outlined in Jewish teachings. In truth, the age-old Jewish dream of a New World Order—set forth in the Talmud and even found in the Old Testament before it—was, in a definitive sense, the driving force behind the rise of the Rothschild Empire. In that sense, and not lightly, we might recall the age-old question: “Which came first? The chicken or the egg?”

Let us now move forward and confront the New World Order and what it constitutes. And let us defeat it with the knowledge that we have before us. . . .