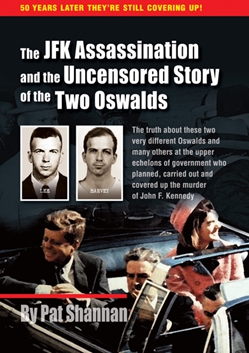 12 in stock (can be backordered)

“Fifty years later, it’s still the same old Military/Industrial complex, the same powers still calling the shots, still threatening, still trying to keep us from the truth. A lone gunman, a magic bullet? Wake up!”
—Jesse Ventura
After half a century, the conspiracy is no theory . . .

The 21st century writers who refer to a singular Lee Harvey Oswald distort their own content and deceive their readers with antiquated data. The John F. Kennedy assassination and the people’s deception over the past half-century is the classic example of disinformation, as it actually was probably the most efficiently performed coup d’etatand cover-up in world history.

At around 11:30 a.m. on November 22, 1963, Julia Ann Mercer was stalled momentarily in traffic at Dealey Plaza and saw a man emerge from a car carrying a rifle case in front of the grassy knoll, just 50 yards west of the Texas School Book Depository (TSBD). It was driven by a man that she later identified as Jack Ruby, after his picture was plastered on TV to the world two days later.

On November 20 and 22, while “Lee Harvey Oswald” was working at the TSBD, he was identified by multiple witnesses at the Dobbs House Restaurant, the Top Ten Record Store in Oak Cliff and the Jiffy Store on Industrial Boulevard. He was also positively identified as being seated with Jack Ruby after midnight, some 10 hours after he was jailed on November 22.

Moments after Officer J.D. Tippitt was shot dead, detectives conveniently found a wallet containing the ID cards of both Lee Harvey Oswald and Alek Hidell. Also found on the street were five ejected .38 caliber shell casings. When Harvey was arrested in the Texas Theater some 40 minutes later, he was carrying a .38 revolver which, of course, does not eject its shells. Astonishing to detectives, Harvey was also carrying in his wallet at the same time the exact two ID cards.

This is just the tip of the iceberg in the case of the “two Oswalds.”

Inside The JFK Assassination and the Uncensored Story of the Two Oswalds by Pat Shannan you will see for yourself the mountain of forensics and photographic evidence proving that there were two Oswalds, the truth of which leads us to even more attempted cover-ups.