RACIOLOGY: The Science of the Hereditary Traits of Peoples 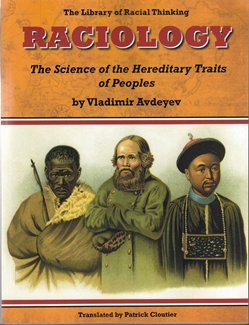 Raciology, by Vladimir Avdeyev, is about the science of the hereditary traits of peoples and races. From metopism to dental traits, from the Rolando and Sylvius brain fissures to the Jewish brain signature, from the ancient Aryans to Nordic peoples, from the Out-of-Africa Theory of Evolution to Polycentric Evolution, from dermatoglyphics (thumbprints) to eye shape, Vladimir Avdeyev discusses it all, with references to works that span of a period of time, which stretches from the present to deep antiquity.

His work discusses the civilization-building traits of the European; he identifies the founders of the Classical civilizations which stretched Spain to India, from Britain to Egypt, as the Aryans; he examines some cultural traits of the races, such as ritual scarring. His work rebuts the fashionable trends of modern Western anthropology.

Where in the world is it nowadays conceivable that a book about the inherent differences between the human races, which pays tribute to the racial theorists of the Third Reich and explicitly claims that all races are not equal, is not only openly sold in the bookstores but even becomes a bestseller? And where in the world is it possible that such a book is favorably reviewed by renowned scholars and provided with two introductions, one written by a member of parliament and the other one by a prominent representative of a liberal organization?

In Germany, Austria or France? Unthinkable! In these countries such a book would almost certainly be banned; its author would be put on trial for “racial discrimination” or “instigation of the populace”; any member of parliament who would have the audacity of endorsing its contents by writing an introduction would immediately be castigated as a “racist bigot” by the media and would have to relinquish his seat in parliament within days.

In the Anglo-Saxon world? Not impossible, but highly unlikely. It is quite true that the English-speaking countries enjoy much greater freedom of thought and speech than the German-speaking ones or France. In the USA, the First Amendment to the Constitution would certainly protect the author of such a book from legal persecution; in Britain or Canada, there are laws against “racism”, but the author of a scholarly work about race would hardly be prosecuted on the basis of these laws. On the other hand, the media would either ignore or angrily denounce his book without discussing his arguments, and he would risk social ostracism. This is exactly what happened in the United States to Arthur Jensen and Hans Eysenck, two serious scientists who had dared to challenge the dogma of racial equality. They were pilloried as “racists” and “haters” and harassed by left-wing fanatics for whom rational arguments did not count. The late biologist Glade Whitney became the victim of a tremendous smear campaign after writing an introduction to David Duke’s My Awakening. Only a handful of scholars or politicians will muster the courage to incur the wrath of the watchdogs of “political correctness”.

In Russia? Yes, in Russia all this is perfectly possibly. The proof is Vladimir Avdeyev’s books Rasologia, the second edition of which came out in late 2007 in Moscow.

Vladimir Borisovich Avdeyev was born in 1962. After acquiring a university degree in Economics, he served in the Soviet Air Force where he was promoted to the rank of First Lieutenant. Since 1993, he has been a member of the Russian Writers’ Association; in 1991, he founded the journal Atenei together with his comrades-in-arms Anatoli Ivanov and Pavel Tulayev. Since 1999, V. Avdeyev has edited a series of books under the title “Biblioteka Rasovoy Mysli” (The Library of Racial Thought), and in 2005, the first edition of his Rasologia appeared. This book was highly successful, and already two years later its author was able to publish an improved and enlarged second edition. The two introductions were written by Andrey Savelev, a delegate of the Russian Duma {parliament) and close personal friend of Avdeyev, and by Valeri Solovei, a historian and member of the ultra-liberal Gorbachev Foundation, who aptly summarizes the book as follows:

“Humanity is entering a new epoch. The world that was shaped by the Enlightenment and Modernity using melodious words such as ‘democracy’, ‘equality’, ‘progress’ and ‘human rights’ is becoming part of a past that will never return. Together with this world, the scientific concepts and the intellectual ballast which belonged to it are doomed too. All this will be replaced by a world based on blood and soil, strength and hierarchy, which will need a new theory and new concepts.”

Avdeyev’s book is subdivided into eight chapters: 1) Racial Science and Anthropology: What are the differences? 2) The Fair Race: Historiography and Anthropology. 3) The Biological Foundation of the Northern Conception of the World. 4) Thoughts about Racial Prejudices. 5) A New Paradigm in Racial Science. 6) The Anti-Racial Myth of the “Melting Pot”. 7) Racial-ideological Neurology, and finally, the striking chapter 8, A Racial Theory of Time. The book contains a large number of excellent photographs and illustrations.

For me as a non-specialist, who only had a very general knowledge of the question, Avdeyev’s history of racial thought was particularly fascinating. I had erroneously taken it for granted that almost all racial theorists had been German and that the Frenchman Arthur de Gobineau (Essay on the Inequality of the Races, 1855) and the Englishman Houston Stewart Chamberlain (Foundations of the Nineteenth Century, 1899) were exceptions. Thanks to Avdeyev, who has carefully studied the writings of all the important racial theorists, I learned I was wrong: the subject of race has been dealt with by numerous and illustrious French scholars, and the study of race flourished in Russia before 1917. Who would have guessed that the term “Nordic race” was not coined by a German, but by a Russian, Joseph Denniker (1852-1918)?

Being a Russian nationalist (nota bene, he is not a Russian chauvinist), Avdeyev objectively and impartially presents the works of all major racial theorists regardless of their countries of origin. He calls himself a “grateful student” of the “great theorists of race” to whom he dedicates his book. In my opinion, Avdeyev can best be characterized as a representative of “classical racial thought.” Although a large part of the book summarizes and discusses the theories of his predecessors, it also contains many of his original thoughts. This is especially true of the fascinating final chapter, “A Racial Theory of Time.”

The amount of solid information this book provides both to the specialist and to the interested layman is awesome—and it will force the reader to jettison many a cherished yet erroneous belief.

I will confine myself to two errors Avdeyev clears up: Since the Soviet Union officially professed the strictly egalitarian doctrine of Marxism, we are naturally inclined to think that the study of racial differences was taboo under Soviet rule. But as Avdeyev shows, this is an error: During the Soviet period, scientific anthropology, which gave due credit to racial differences, was not only not oppressed, but even encouraged.

Second example: As National Socialist Germany saw in Bolshevist Russia its arch-enemy, one might presume that in the Third Reich scientists were strictly forbidden to quote Soviet sources. As a matter of fact, one of the leading German racial theorists, Fritz Lenz, quoted no fewer than 34 works of Soviet scientists in his seminal study “Menschliche Erblichkeitslehre” [“A Theory of Human Heredity”], which he wrote in 1932. This fact did not prevent Lenz from becoming highly respected after Hitler’s assumption of power.

Some people may argue that a book such as Avdeyev’s has no practical value, and they may ask “what good does it do?” My answer to this objection is the following:

Firstly, true science enriches our knowledge, and knowledge is always valuable, regardless of whether it offers material advantages or not. When an ornithologist discovers a truly new kind of bird, this will be reported by the major media around the world, although this discovery does not benefit us materially. And if it is useful to add to our knowledge of birds, it is undoubtedly even more useful to increase our knowledge of man—of ourselves.

But there is more. A correct understanding of race and racial differences is of tremendous importance because we thereby recognize certain extremely grave errors Western society has committed, and this understanding equips us to remedy them. The fallacious doctrine of racial equality, which has been promoted for decades by the followers of Franz Boas, has caused pernicious political consequences. It has made possible the catastrophe of forced racial integration in the USA, which has done immeasurable harm to both the white and the black populations, and it has paved the way for massive third-world immigration into Europe, North America and Australia. What is happening before our eyes in France is the handwriting on the wall. Race does matter, whether or not some people want us to see this.

With his book, which is the fruit of many years of hard study, Vladimir Avdeyev has rendered to science, and to us all a grand service. His work deserves to be translated from Russian into English and into all the other major Western European languages.