View cart “The 2001 Anthrax Deception” has been added to your cart. 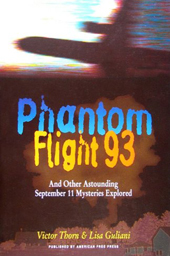 There are lots of books out surrounding 9/11, but this is the only book telling the real truth on Flight 93 . . . and it’s a trailblazer!

In this amazing book, Victor Thorn and Lisa Guliani unveil the facts that demonstrate beyond any doubt that federal authorities and their allied propagandists in Hollywood and the mass media have deliberately told fantastic lies regarding the disappearance from the radar of United Airlines Flight 93 on September 11, 2001.

We’ve been told that UA Flight 93 crashed in Pennsylvania farm country after a struggle aboard between passengers and the reported Muslim hijackers who had taken over the plane, but don’t believe it.

The legend of the heroic rebel passengers who took on the terrorists may (or may not) be rooted in reality, but there’s much more to the story than you’re supposed to know. This is the one and only book focusing on Flight 93, amidst a plethora of books relating to 9/11, and when you’ve finished this, you’ll join Victor and Lisa in rejecting what the government has told us.

For far too long, the ambiguities surrounding Flight 93 have been overlooked by many independent researchers who have accepted the story that the plane crashed when kidnapped passengers rebelled against the hijackers said to have taken over the plane. In fact, as Victor and Lisa demonstrate, there’s even some question as to whether the plane actually crashed at the location where the government says it did.

And that’s just the beginning. Phantom Flight 93 also explores other mysteries related to the horrifying day when life in America changed forever.