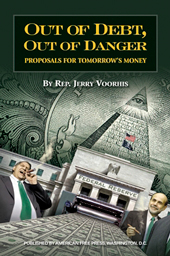 The First Big Book to Take on the Private Federal Reserve Is Available Again, at Last After 67 Years!

By Congressman Jerry Voorhis. The one book all critics of the Fed—even including Ron Paul—need to read and understand. . . . The first word—and maybe the last word—on the usurious plutocrats who trashed the U.S. Constitution and grabbed control of America’s money system. . . . Here’s the final solution to the problem of the Federal Reserve System—one based on constitutional principles that have been ignored, suppressed or otherwise forgotten.

Chapters Include: The Great Debate—From Jefferson to Hamilton • The National Debt from Hamilton to Lincoln • The National Debt from Lincoln to Franklin Roosevelt • The Art & Mystery of Banks and the Constitution • The Tragic Record of ‘Sound’ Money • Constructive Financial Proposals for Warfare & Welfare • The Federal Reserve Banks and the Credit of the U.S. • To Provide for a Common Defense • To Promote the General Welfare • The Economics of a Free World • A Bill for Making the 12 Federal Reserve Banks the Property of the American People • Much more.

Horace Jeremiah “Jerry” Voorhis (April 6, 1901 – September 11, 1984) was a Democratic politician from California. He served five terms in the United States House of Representatives from 1937 to 1947, representing the 12th Congressional district in Los Angeles County. He was the first political opponent of Richard Nixon, who defeated Voorhis for re-election in 1946 in a campaign cited as an example of Nixon’s use of red-baiting during his political rise.

If Jerry Voorhis were in Congress today, there’s no doubt that he would be leading the fight to audit—and abolish—the Federal Reserve System. Defenders of the Fed call its critics “righ wing nuts.” But there’s no way they could tar Voorhis with that label. In fact, Voorhis—a former registered member of the Socialist Party—was one of the most progressive members of Congress by anyone’s standards. He served as a Democrat, representing a portion of Los Angeles County, from 1937 to 1947. However, Voorhis was an independent intellectual—a populist who was willing to buck the plutocratic elite—as he often did. As a consequence, it was taking on the Fed that turned the tide against Jerry Voorhis.

A self-described “Christian socialist”—and also a committed anticommunist—Voorhis was wise to the usurious reality of the privately owned and controlled banking monopoly known as the Federal Reserve. In 1943, Voorhis went so far as to write this stirring indictment of the Fed, a controversial work entitled Out of Debt, Out of Danger. In its pages Voorhis reviewed the history of the Fed and how it impacted upon American life to the detriment of this country’s farmers, workers, and small businessmen. And it was precisely because of Voorhis’s outspoken lambasting of the Fed that he paid the ultimate political price.

In 1946, as Jerry Voorhis sought a sixth term in Congress, a well-heeled clique of financiers and industrialists (the “Committee of One Hundred”) selected and bankrolled a candidate to oppose Voorhis.

In fact, an emissary of one of the New York banking houses (which dominate the Fed through the Federal Reserve Bank of New York, the most influential of the Fed branches) came to California to meet with the committee, promising support for the campaign against Voorhis. Voorhis was considered “one of the most dangerous men in D.C.”— in the eyes of the plutocrats, that is.

The popular Voorhis, confident of reelection, was taken by surprise because of a particularly malicious “dirty tricks” operation against him, and he was defeated in a major upset. The mastermind of the hit-and-run campaign against Voorhis was a notorious Los Angeles lawyer known throughout his shady career for his seemingly endless array of organized crime connections: the enigmatic Murray Chotiner.

In later years Chotiner worked with the Anti-Defamation League (ADL) of B’nai B’rith in organizing a similar black-bag operation against Liberty Lobby, the populist institution that consistently targeted the plutocratic interests behind the Fed. Perhaps not coincidentally, the ADL’s primary complaint against Liberty Lobby stemmed from the fact that Liberty Lobby had repeatedly asked the Justice Department to require that the ADL, a foreign agent for Israel, register as such with the Justice Department as required under the Foreign Agents Registration Act—legislation authored by none other than Jerry Voorhis.

In any case, Voorhis had clearly made some powerful enemies. So did, in later years, the young Republican who had been drafted by the plutocrats to run against Voorhis: none other than Richard Nixon. Ironically—prior to being “Watergated”—Nixon said of Voorhis (whom he actually liked personally): “I suppose there was scarcely ever a man with higher ideals than Jerry Voorhis, or better motivated than Jerry Voorhis.”

Yet, nearly 30 years later when the plutocratic controlled media’s wrath came crashing down on Nixon, the media energetically recalled Nixon’s 1946 campaign against Voorhis, carefully ignoring the fact that the international banking interests (which actually dominated the “mainstream media”) had been prime movers behind Nixon’s assault on Voorhis. Voorhis died in California at age 83 in 1984. His legacy will not be forgotten.