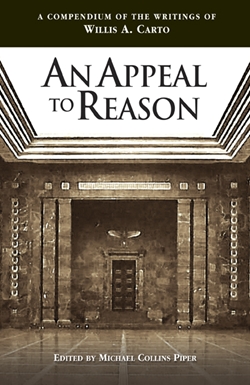 53 in stock (can be backordered)

For the first time, between two covers, the preeminent writings of one of the most controversial and outspoken figures in the modern American political arena . . .

For over 50 years, Willis A. Carto was at the center of the American nationalist movement, responsible for the publication of literally hundreds—no, thousands—of books, newspapers, magazines, monographs and other literature that has reached millions of readers in the U.S. and around the globe.

Through weekly publications such as The Spotlight and American Free Press and such widely-read journals as The Barnes Review, Carto has been responsible for maintaining traditional American populism and nationalism as a thriving force in the political debate over the conduct of U.S. (and international) affairs.

In this selection of Carto’s writings—ranging over half a century—longtime Carto associate Michael Collins Piper has assembled a fascinating array of Carto’s most cogent works, from short essays to extended dissertations on a wide variety of topics: from economics and foreign policy and cultural affairs and on to religion and history and current events—a virtual intellectual panoply needed by every patriotic American—and every nationalist around the globe—in the battle to reclaim national sovereignty in the face of the greatest assault the world’s people have ever faced: the looming New World Order.