View cart “PERFIDY: The Government Cabal That Knowingly Abandoned Our Prisoners of War and Left Them to Die” has been added to your cart. 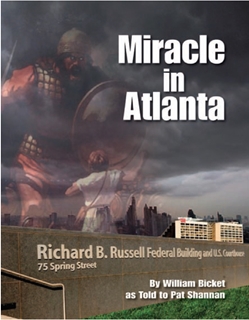 New Book “Miracle in Atlanta” Is One for the Ages!

It’s bad enough to get caught and indicted for a crime you actually committed. A criminal can have no greater fear than that of getting captured. But here is the true story of a law-abiding, innocent man being kidnapped off the streets of Kansas City by plain-clothed badge-wearers and jailed and hauled a thousand miles away to face trial for a created “non-crime” crafted by clever federal agents and the Department of Justice.

Pat Shannan tells firsthand as never before of the targeting, robbing, jailing, and trying of William Bicket that resulted in a miracle that few persecuted by the system will ever get to see. Here is the story from inside the Atlanta Federal Prison and federal courtroom as can be told by no one else. Everyone agrees: No book like this has ever been written. It’s one of a kind. This is the true story of a modern-day Goliath going down to the slingshot of David.

There is only one avenue of escape when you’ve been targeted, and few in this day and time will ever discover, let alone trust it enough to use it. Miracle in Atlanta is not a religious book, but the miracle was produced by faith in God alone. This is not a book offering legal advice, but rather more of what not to do when caught in the federal trap.

And it has an extra added attraction: On page 42, Pat comes out of the closet after nearly a quarter century! (No, it’s not what you may be thinking!)

As far as we know, there were only two people in America that ever beat a “conspiracy” charge in a federal courtroom without a lawyer. One was Ohio Congressman Jim Traficant. The other was Bill Bicket of Georgia, whose 1990s jailhouse and courtroom experiences launched the career of longtime investigative reporter and writer for Media Bypass magazine, Spotlight and American Free Press newspapers, as well as the radio investigative voice at the “People’s Radio Network” and a few others over the years—the guy you know as Pat Shannan. (In this book, the authors reveal a little secret about the relationship between Shannan and Bicket that few people knew before this book was released in August 2015.)

Now in their most recent publication (10 years in the writing) Bicket/Shannan are telling the “inside” story of being a victim of false prosecution for “knowing too much,” the depths to which federal agents will stoop to lie under oath and the statutory motivation that has been provided in recent years to not only allow such inside “home field advantage” deceit but to reward it.

We are sure you will agree upon your completion of this book, that no story quite like this one has ever been written.

Indeed, it is a modern-day saga of “David vs. Goliath.”

“Recent figures show that trials in federal criminal cases are rare because nine in 10 cases are settled with pleas, the accused being too scared to challenge the federal government, whether he or she is innocent or not. Only 3% of the cases ever go to trial, and, among those that do, the defendant wins once in every 212 times.

Read Miracle in Atlanta, and you will learn for the rest of your life a lesson you may use yourself if you are ever unfairly targeted by agents of the federal government.

I know Pat Shannan better than anyone, as everybody who knows us both can attest, and we are reporting this story from inside the American gulag with no punches pulled. We are naming the liars and frauds inside the U.S. Attorney’s office, as well as documenting the lies told to the grand jury by the IRS agents in order to gain the contrived indictment; and we cite the singular federal statute that actually compensates the players upon conviction. We name the deceptive federal magistrates and judges as well as commending a couple of fair ones. This is an amazing real-life story.

Most of all we show you the power of faith—the only avenue of escape from the satanic clutches of these legalized thieves. Nobody gets out of the federal gulag without this assistance.”

“Enjoying the book, by the way. I think you are truly the ‘Most Interesting Man in the World.’”—Richard James, CEO, Your Business Automated, Phoenix, Arizona

“I can’t put [MIRACLE IN ATLANTA] down. Wow! I can’t absorb all of it yet . . . so I am reading slowly. Billy Pat’s’ autobiography in the first part was wonderful.”—J. McDonald, Des Moines, Iowa

“[MIRACLE IN ATLANTA] is worth so much more than the $30 maybe you don’t want to part with for just another book. We all know there are many things money can’t buy, and [William Bicket’s] baptism by fire brought him wisdom, strength, and experience beyond all price. The most important gain, however, for him and for all of us who read his book, is the testimony of faith which only comes from going through that fire relying on the strength, righteousness and justice of Christ alone. Bill did this and gained that which can never be taken from him. The story of how this happened for him is an invaluable testimony of what can happen for each one of us who believes in the name of our Savior, no matter what fire we must go through.”—L. Tyler, Tennessee

“I have just finished reading Pat Shannan’s new book MIRACLE IN ATLANTA. Over the past 45 years I have read most of the books by people actively involved in trying to inform the people of what is happening to our nation. It has been quite rare to read the material by these many patriots telling us how we need to recognize that when politicians and public servants lie, the problem is spiritual. Pat’s new book is an education on lawful money, history and judicial trickery, as well as quite a compilation of his own life experiences. His message explaining the only way to protect ourselves when we are exposed to wickedness in high places is unforgettable. The book is a must read, and I can tell you right now that MIRACLE IN ATLANTA is worth a whole lot more than the 30 bucks you are wondering if you should spend on it.”—Red Beckman, patriot activist and author

“If you wonder how miracles ‘happen,’ just read this book, MIRACLE IN ATLANTA. As it turns out, the various stages of our lives are preparation for the events that will come our way. Bill’s life was, indeed, preparation for battle. Learn how Bill was led to victory when most around him expected defeat. He was going up against a legal ‘goliath’ and most folks watching this battle did not know of the outcome of the original David vs. Goliath. Having the biggest and best Co-Counsel available makes for a winning team.”—Sunny, via email