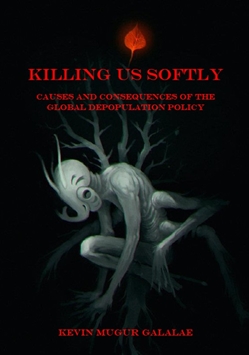 The international community, aided by the United Nations and motivated by the best intentions, has used covert methods to combat population growth. In the process, they have committed sinister crimes and inadvertently degraded our intellectual and genetic endowments, in order to preserve humanity from the even greater evils of nuclear annihilation, mass starvation and environmental devastation.

After World War II, world leaders were so weary of brutal conflict that they agreed to find a way to peacefully coexist. Since then, peace and prosperity have depended on an ultra-secret effort to reduce human fertility, so as to defuse the population bomb before nations outgrow their natural resources and are tempted to take the resources of weaker neighbors by force. Instead of waging open war on each other, the military-industrial establishments of nation states have been empowered to use chemical and biological weapons to wage a silent war on the reproductive ability of the global population. Consequently, population control since 1945 has been the pivotal element of the international world order and the world’s best-kept secret, turning the basic elements of life into weapons of mass sterility and selective morbidity that affect nearly every human being on the planet.

Author Kevin Galalae unravels not only the carefully concealed methods and means of population control, but also the insurmountable obstacles that stood in the way of legislating family size, and that drove the population control effort underground. Paradoxically, religion and democracy, which embody the noblest values and ideals of mankind, are ultimately responsible for the odious crimes of the Global Depopulation Policy.

To save ourselves, we have no choice but to rethink the very foundations of human civilization, recreate our social and political institutions, and alter our worldview in such fundamental ways as to leap to a higher level of consciousness. Fortunately, the author believes this is within our capabilities.

Since the end of the Second World War and with the formation of the United Nations in 1945, international peace and stability have been maintained by controlling population growth. Unbeknown to the masses, governments have used covert methods to limit births in developed and underdeveloped countries alike and to accelerate deaths in Africa and a few critically poor and overpopulated areas elsewhere.

The methods used by every country to control population growth have been dictated by the level of development and the existing infrastructure as much as by political will or lack thereof and have either been imposed by force and deception from the outside or adopted willingly by the governing, military and scientific elites of nation states that have relied on the moral, technical and monetary assistance of the United Nations, its agencies, and the greater international community.

Regardless of the methods used to control population and whether they are imposed or selfimposed, strict secrecy and deception have been necessary to prevent the masses from discovering the bitter truth that for the past 68 years they have been the object of a silent and global offensive, a campaign of attrition that has turned the basic elements of life into weapons of mass infertility and selective death.

Without our knowledge or consent, governments the world over have subverted our reproductive freedom and ability to procreate to achieve ambitious and necessary demographic objectives and in the process have committed the most odious and wide-sweeping crimes in human history to save mankind from even greater evils: nuclear annihilation, mass starvation, and environmental devastation. The birth of nearly two billion people has been prevented and the death of half a billion hurried. While these goals have been intentional, the architects of the Global Depopulation Policy have unintentionally undermined the genetic and intellectual endowment of the human species and have set back eons of natural selection. Their intentions have never been malevolent, but the unintended results of their actions are frightening.

It is the task of this article to reveal this silent offensive’s secret methods and insidious means, which make up the world’s greatest con, so that an awakening to the dire realities we face will prompt each and every human being on earth to demand a share of the responsibility and population control can be legislated across the globe, with little or no resistance, for the next three generations or until our numbers are sufficiently low to allow humanity to live in balance with nature and at peace with itself.

This is the only way our children will have a future and a life of dignity.