In the SHADOWS of the AMERICAN CENTURY: The Rise and Decline of U.S. Global Power 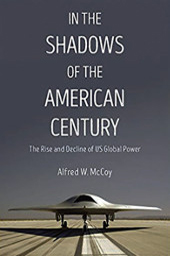 In a completely original analysis, prize-winning historian Alfred W. McCoy explores America’s rise as a world power—from the 1890s through the Cold War—and its bid to extend its hegemony deep into the 21st century through a fusion of cyberwar, space warfare, trade pacts, and military alliances. McCoy then analyzes the marquee instruments of U.S. hegemony—covert intervention, client elites, psychological torture, and worldwide surveillance.

Peeling back layers of secrecy, McCoy exposes a military and economic battle for global domination fought in the shadows, largely unknown to those outside the highest rungs of power.

Can the United States extend the “American Century” or will China guide the globe for the next hundred years? McCoy devotes his final chapter to these questions, boldly laying out a series of scenarios that could lead to the end of Washington’s world domination by 2030.

Alfred W. McCoy holds the Harrington Chair in History at the University of Wisconsin-Madison. His 2009 book Policing America’s Empire won the Kahin Prize from the Association for Asian Studies. In 2012, Yale University awarded him the Wilbur Cross Medal for work as “one of the world’s leading historians of Southeast Asia and an expert on … international political surveillance.”

“In the Shadows of the American Century persuasively argues for the inevitable decline of the American empire and the rise of China. Whether or not one is a believer in American power, the case that Alfred McCoy makes—that much of America’s decline is due to its own contradictions and failures—is a sad one. He provides a glimmer of hope that America can ease into the role of a more generous, more collaborative, if less powerful, world player. Let’s hope that Americans will listen to his powerful arguments.” —Viet Thanh Nguyen, Pulitzer Prize-winning author of The Sympathizer

“[A] brilliant and deeply informed must-read for anyone seriously interested in geopolitics, the history of Empire, and the shape of the future.” —New York Journal of Books

“What is the character of this American empire?” Alfred McCoy asks at the outset of this provocative study. His answer not only limns the contours of the American imperium as it evolved during the twentieth century, but explains why its days are quite likely numbered. This is history with profound relevance to events that are unfolding before our eyes.—Andrew J. Bacevich, author of America’s War for the Greater Middle East: A Military History

“Alfred McCoy offers a meticulous, eye-opening account of the rise, since 1945, and impending  premature demise of the American Century of world domination. As the empire’s political, economic, and military strategies unravel under cover of secrecy, America’s neglected citizens would do well to read this book.”—Ann Jones, author of They Were Soldiers

“McCoy’s detailed, panoramic analysis of the past, present, and future of the American empire covers all spheres of activity including not just land, sea, air, space, and cyberspace, but also the netherworld of covert operations—and seasons all of this with some fascinating personal vignettes. His new book, The Shadows of the American Century, joins the essential short list of scrupulous historical and comparative studies of the United States as an awesome, conflicted, technologically innovative, routinely atrocious, and ultimately hubristic imperial power.”—John Dower, Pulitzer Prize-winning author of Embracing Defeat, War Without Mercy, and The Violent American Century

“One of our best and most underappreciated historians takes a hard look at the truth of our empire, both its covert activities and the reasons for its impending decline.”—Oliver Stone

“In the Shadows of the American Century is a valuable contribution to geopolitical discourse that draws important lessons from history.”—Foreword Reviews

“McCoy’s latest book, In the Shadow of the American Century: The Rise and Decline of U.S. Global Power, provides an autopsy on a dying empire, which has squandered its moral capital by promoting wide-scale torture and mass surveillance….The end of empire scenarios relayed by McCoy in dark terms could in turn provide positive opportunities for societal change as the necessity for constant war is removed.”—The Progressive