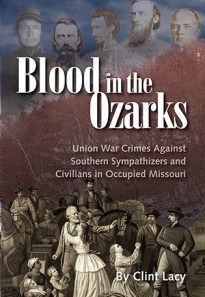 By Clint Lacy. Deep in the eastern Ozarks of Missouri, a battle still rages about a massacre that happened on Christmas Day of 1863. While some call it a simple rescue mission to liberate captured Union soldiers, others claim that it was mass murder, which included women, children and the elderly.

The Civil War (or the War of the Rebellion as many Southerners prefer to call it), was a bitter and brutal conflict, but perhaps never more so than in the state of Missouri, where the wounds of the Kansas border wars were still open and festering.
Though no famous battles were fought in Missouri, there was severe fighting across the state. In fact, Missouri ranks third in the number of battles and skirmishes during the war. Most of the 1,162 military encounters that took place in the Show Me State were smaller and much more personal than in the Eastern Theater of the war.
The brutality of the conflict was punctuated with multiple Union war crimes, especially in the eastern Ozarks. There, Southern patriots like Joe Shelby, Timothy Reeves and others raised regiments and did the best they could to halt the advance of the better-armed and better-supplied Union juggernaut, conducting lightning raids and surprise attacks—and even beating the Union in pitched battles.
But rather than take their frustrations out upon the rebel forces, Union commanders in the area—Maj. James Wilson, Capt. William Leeper and others—preferred instead to target the civilians of the Ozarks as a way to subjugate the Southern sympathizers of the region. As a result of this policy, 27,000 Missouri citizens were killed during the war.
Starvation, theft, looting, torching homes and outright murder were not uncommon tactics used by this bevy of Federal miscreants whose criminal tactics culminated on Christmas Day 1863 at Tom Pulliam’s farm in Ripley County. It was there, on one of the holiest of Christian holidays, a day universally regarded as a day to avoid bloodshed between even the most bitter of enemies, that the Confederates and their families were set upon by a group of Union cavalry under the command of the aforementioned Maj. Wilson.
According to eyewitnesses and numerous other sources, 34 of the attendees were killed and 100 more wounded by the berserk Union Missouri State Militia Cavalry.
To this day, local historians with an axe to grind have worked diligently to cover up this heinous war crime—perhaps the worst of the Civil War—to protect local reputations. Historian Jerry Ponder, who was the first modern historian to expose this Christmas Day massacre—was relentlessly defamed for his pioneering reports on the tragedy. But, despite the recriminations, Ponder never backed off his research or his story.
Sadly, Ponder passed away in 2005, but author Clint Lacy has taken up Ponder’s torch of truth and, in this book, Lacy presents all the known evidence, making a strong case that the Wilson Massacre, as it has come to be known, did in fact occur as Ponder claimed, despite the denials of those looking to sweep it under the rug.
But the Wilson Massacre was not the only Union war crime in Missouri. Lacy also discusses many others committed by Union forces in Missouri in his attempt to bring history into accord with the facts and shine the light of truth on one of the darkest periods of American history.
Softcover, foreword by TBR Editorial Board member Prof. Ray Goodwin, six appendices based upon period newspaper reports and diary entries, informative photo section, 157 pages, $17.