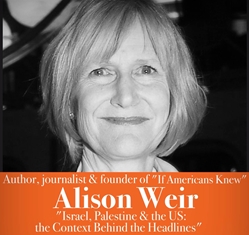 In this 50-minute interview on CD, Alison Weir, founder of If Americans Knew, discusses the Israeli-centrism of the U.S. mainstream media and how it’s harming Palestinians, specifically children.She also details the damage this does to the reputation and the very fabric of the United States, and explains how it’s up to all of us to help change this.

Weir details many examples of how the U.S. mainstream media downplays Palestinian deaths and exaggerates Israeli fatalities, however scarce they may be.

The mission of If Americans Knew is to inform and educate the American public on issues of major significance that are unreported, under reported, or misreported in the American media.

Israel is the largest recipient of U.S. aid in the entire world. It receives more aid than that given to all the countries of sub-Saharan Africa, Latin America and the Caribbean, put together.

Israel receives about $7 million dollars per day from the United States, and there is evidence that the total cost to American taxpayers is closer to $15 million a day. Yet this information is almost never printed in American newspapers. Coverage of the Middle East in general, and of Israel in particular, virtually never reports this enormous American connection with this region.

Empowered by American money, Israel is occupying land that does not belong to it, is breaking numerous international laws and conventions of which it is a signatory, and is promulgating policies of brutality that have been condemned by the United Nations, the European Union, the National Council of Churches, Amnesty International, the International Red Cross, and numerous other international bodies. This truth is also rarely reported.

Through the money and weaponry provided by the United States, Israel is imposing an ethnically discriminatory nation on land that was previously multicultural. There is ethnic and religious discrimination inherent in its national identity, and a doctrine of the supremacy of one group over all others permeates its political, financial, and military policies. This also is virtually never reported.

There are a variety of organizations and individuals in Israel who are protesting their government’s policies, and who are working strenuously and courageously on behalf of human rights and justice. It is their intent to create a just and fair nation with equal rights for all its citizens. They are refusing to serve in the military occupation of the West Bank and Gaza, and are actively trying to prevent Palestinian homes from being bulldozed. These actions are also not covered in the American media.

American support of the Israeli government is against our national interest on every level: It places us at war with populations whose desperate plight we are helping to create, and who, quite correctly, place the responsibility for their sufferings on us. It makes us an accomplice to war crimes and an accessory to oppression. This also is not reported.

In analyzing the American media, we are increasingly discovering a cover-up of appalling proportions. Israel is being protected, the news about Palestinians in particular and Arabs in general is being distorted, and the American public is being manipulated.

We believe strongly that if Americans knew the truth about Israel and Palestine—about the massive amount of our tax money that is being given away to Israel, and about the human costs of Israel’s American-financed militarism—they would demand an immediate re-thinking of our policies in this region.

It is the goal of If Americans Knew to inform the American public accurately about this area. Most of all, it is to inform Americans about our enormous, and too often invisible, personal connection to it.

Americans, through our blank check to Israel, are empowering the worst elements of Israeli society, and undermining those working for a just, peaceful, and nondiscriminatory nation.

We are driving the violence in this region. We can stop it.