DAYS of HUNGER, DAYS of CHAOS: The Coming Great Food Shortages in America 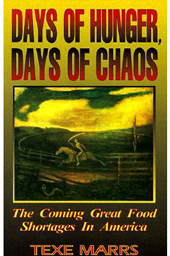 “Nothing to Eat,” scream the newspaper headlines. “Hungry Mobs Panic and Riot.” Are we, in fact, about to suffer disastrous food shortages? Will an angry and desperate people strike back in rage, giving a corrupt government the pretext to set up a frightening police state?

Days of Hunger, Days of Chaos reveals the horrifying truth about a monumental plot to starve Americans and the people of the world into submission. The coming great hunger will come upon us suddenly, at an instant, astonishing all with its ferocity and total devastation.

The book of Revelation warns of deadly famine and pestilence to overtake the world in the last days. We now face the ominous reality of mass suffering and death. It will be hell on Earth, a fierce and brutal time of utter misery and despair. In this stunning investigative report, Texe Marrs reveals how these incredible prophecies are quickly coming to pass.

Discover how you can survive the unstoppable, fast-coming food crisis. Why die of starvation and deprivation when you can live—and even prosper—in the coming days of hunger and chaos?