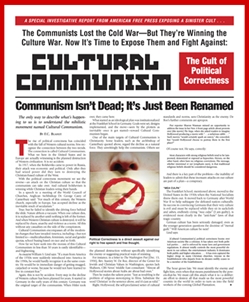 The Communists Lost the Cold War—But They’re Winning the Culture War. Now It’s Time to Expose Them and Fight Back!

The only way to describe what’s happening to us is to understand the ni­hilistic movement named Cultural Communism.

The rise of political correctness has coincided with the fall of Western cultural norms. Few recognize the connection between the two trends. The connection is called Cultural Communism.

What we here in the United States and in Christian Europe are actually witnessing is the planned destruction of Western civilization. It is no accident.

In 1917, when the Bolsheviks came to power in Russia, their attack was economic and political. Only after they had seized power did they turn to destroying the Christian-based culture of the West.

With the political correctness movement we see the reverse—an attack on the Christian culture so that the communists can take over. And cultural bolshevism is winning while Christian leaders wring their hands.

In a recent speech to a meeting of the World Council of Churches, Anglican Archbishop Dr. George Carey of Canterbury said: “For much of this century, the Western church, especially in Europe, has accepted decline as the inevitable result of secularism.”

True; but he failed to identify the driving force behind the slide. Nature abhors a vacuum. When one culture dies, it is replaced by another until nothing is left of the former. And when Western Christian culture is destroyed, it will be replaced by chaos, anarchy and violence as a norm. All this without any casualties on the side of the conspirators.

Cultural Communism encompasses all of the modernist changes that have invaded America including—but not limited to—multiculturalism, feminism, racial and gender quotas, school busing based on race and so forth.

How far we have sunk into the morass of this Cultural Communism in less than 50 years is easily identifiable—and frightening.

Here’s the report that explains it all—and why this cult must be destroyed if we are to retain our right to freedom of speech and our culture.