View cart “FORGOTTEN WORLDS: From Atlantis to the X-Woman of Siberia and the Hobbits of Flores” has been added to your cart. 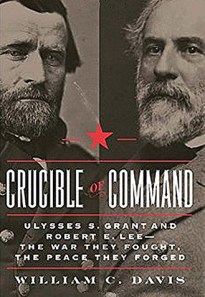 By William C. Davis. They met in person only four times, yet these two men—Ulysses S. Grant and Robert E. Lee—determined the outcome of America’s most divisive war and cast larger-than-life shadows over their reunited nation.

They came from vastly different backgrounds. Differing circumstances colored their outlooks on life: Lee, the melancholy realist; Grant, the incurable optimist.
Then came the Civil War that made them both commanders of armies and heroes to the multitudes of Americans who rightfully place them in the pantheon of our greatest soldiers. Forged in battle as generals, these two very different men became almost indistinguishable in their instincts, attributes, attitudes and skills in command.
Each the subject of innumerable biographies, Grant and Lee have never before been paired as they are here.
Exploring their personalities, their characters, their ethical compasses and their political and military worlds, Davis uses new evidence on both men to find surprising similarities between them, as well as new insights on how their lives prepared them for the war they fought. Crucible of Command is both a gripping narrative of the final year of the war and a fresh, revealing portrait of these two great commanders.
Softcover, 688 pages