CHURCHILL, HITLER, and the UNNECESSARY WAR 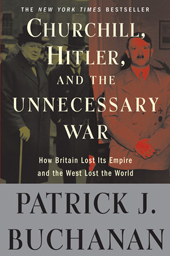 Category: World War I and II

How Britain Lost Its Empire and the West Lost the World

Were World Wars I and II inevitable? Were they necessary wars? Or were they products of calamitous failures of judgment?

In this monumental and provocative history, Patrick Buchanan makes the case that, if not for the blunders of British statesmen–Winston Churchill first among them–the horrors of two world wars and the Holocaust might have been avoided and the British Empire might never have collapsed into ruins. Half a century of murderous oppression of scores of millions under the iron boot of Communist tyranny might never have happened, and Europe’s central role in world affairs might have been sustained for many generations.

Among the British and Churchillian errors were:

Certain to create controversy and spirited argument, Churchill, Hitler, and the Unnecessary War is a grand and bold insight into the historic failures of judgment that ended centuries of European rule and guaranteed a future no one who lived in that vanished world could ever have envisioned.

Patrick J. Buchanan was a senior adviser to three American presidents; ran twice for the Republican presidential nomination, in 1992 and 1996; and was the Reform Party candidate in 2000. The author of more than a dozen books, including the bestsellers Right from the Beginning; A Republic, Not an Empire; The Death of the West; State of Emergency; and Day of Reckoning, Buchanan is a syndicated columnist and founding member of three of America’s foremost public affairs shows: NBC’s The McLaughlin Group and CNN’s The Capital Gang and Crossfire.