View cart “Confessions of an Illuminati: The Time of Revelation and Tribulation Leading Up to 2020 (Volume II)” has been added to your cart. 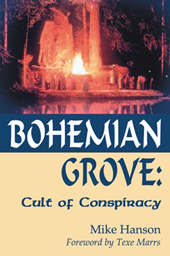 They secretly meet for 17 days each July in a remote “sacred grove” of ancient redwood trees in the deep forests surrounding San Francisco. Some 1,500 in number, their membership roll is kept secret, but includes the super-rich, blood dynasty member families of the Illuminati; heavy-hitting corporate chieftains and high government officials. Mingling among them are a number of Hollywood movie stars, Broadway producers, famous entertainers, musicians, authors, painters and poets. Great statesmen and—so we’re told—gentlemen.

Even Great Britain’s Queen Elizabeth showed up in 1983. Her Majesty was honored with an ecstatic pagan dance ceremony, complete with expensive, elaborate stage props such as Egyptian pyramids and Babylonian ziggurats. Yet, even the Queen of England could not join this club if she applied for membership. Why? Because this club is exclusively all male. Women have not ever been allowed since the club’s founding in 1873.

So what is this ultra-elite club with the bizarre Druid customs? They are the Bohemians, formally known as the Bohemian Club. They practically own their own county north of San Francisco, a 2,700-acre summer camp they call the Bohemian Grove. Since the 1890s, the “Grovers” (as they are known to intimates) have gathered amongst these redwood trees to “get away from it all,” have a little summer vacation fun, and avoid business dealings altogether for two weeks. At least, that’s the official story.

Then, there are the other stories…some of them too strange to believe. Tales of world leaders plotting the world’s destiny there in secret “war rooms,” hand-picking Presidents and future leaders from the Bohemian Grove. Reports of occult rituals being conducted by these same powerful men, clad only in hooded red, black and white robes, offering an effigy of a human being to be sacrificed by fire to a towering 45-foot stone owl God, the “Great Owl of Bohemia” in a ceremony called “The Cremation of Care.” Sometimes, they discard the robes, don women’s clothing and parade around onstage in theatrical productions or—if the spirit so moves them—they wear no clothes at all!

But is any of it true? Does the Bohemian Grove emulate the ancient mystery cults of Babylon, Rome, and Greece? Do its members celebrate the old Gods such as Molech, Ishtar, Lilith, Attis, Mithra, Apollo, Zoroaster, and others? Or is it a western secret society like the freemasons and Yale’s exclusive Skull and Bones? Are they just having “good clean fun” at the Grove? Or are they covertly plotting to take over the world? Why do our world leaders meet here to share a fascination with the arts and all things Bohemian? Why the obsession with the occult and ancient Babylon? This book proposes to answer many of the most frequently asked questions about Bohemian Grove, investigate the rumors, fully document what is known to be true, and hopefully destroy a few misconceptions.

Closed to the public, sealed off by helicopters, a private security force, and armed guards, there can be no doubt that without the prying eyes of the public upon them, the power elite may engage in whatever activities they wish at the Grove. Whether it’s crafting policy matters in secret, dancing around in drag, cheating on their wives with prostitutes, taking drugs, practicing black magic, or even committing murder, the pristine isolation of the Bohemian Grove provides a convenient cover for any immoral, illegal, or “un-gentlemanly” behavior one desires.

For most the club’s long history, the public could only speculate as to what these men were doing in there. Books and news articles about the Bohemian Grove have been scarce; we could only rely on a little “leaked” information from insiders and the tireless work of a few dedicated researchers and activists.

Now the truth can finally be revealed. Mike Hanson is a first-hand eyewitness who has been inside the Bohemian Grove. In the summer of 2000, Mike secretly “infiltrated” the Grove. He filmed several hours of footage, including the entire “Cremation of Care” ritual, which will be published in full here for the first time. He peers behind the deep, green foliage and twisted vines, and the moss-covered brown limbs and trunks of ancient, gnarled trees to discover what really goes on at the Bohemian Grove.

Bohemian Grove: Cult of Conspiracy promises to uncover the Grove’s hidden history and expose the secrets of the redwoods.