View cart “America’s Racial POWDER KEG: How a Violent Dependency State Has Been Created Within the Black Community” has been added to your cart. 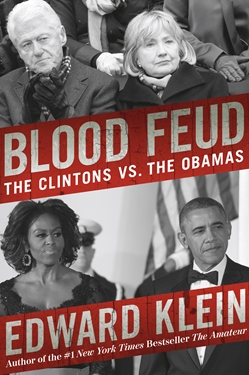 BLOOD FEUD: The Clintons vs. the Obamas

In this highly anticipated follow-up to his blockbuster The Amateur, former New York Times Magazine editor-in-chief Edward Klein delves into the rocky relationship between the Obamas and the Clintons.

Best-selling conservative writer Ed Klein has written a jaw-dropping in its revelations, compulsively readable expose of the rocky relationship between the Obamas and the Clintons. An old-school reporter with incredible insider contacts, Klein reveals just how deep the rivalry between the Obamas and the Clintons runs. With unparalleled access to the most sensitive sources close to the principals, details on closed-door meetings buttressed by hundreds of interviews, Blood Feud is a stunning exposé of the animosity, jealousy, and competition between America’s two most powerful political couples and Democratic standard-bearers.

For example, apparently, according to Klein, Obama senior adviser Valerie Jarrett wanted Hillary Clinton to go on the Sunday talk shows to discuss the Benghazi attack instead of U.N. Ambassador Susan Rice. Bill wasn’t having it.

“There is no way I’m going to let you do those TV shows with those talking points,” Bill said, according to one of the participants in the meeting. “I’m ordering you to turn the White House down.”

“Easy—you say N period O period,” Bill said. “Look, I’m thinking of you and the 2016 campaign. Those bulls**t talking points manufactured in the White House sausage factory aren’t going to hold up. Axe and the rest of them are trying to hang the whole mess on you.”

Klein’s scathing reporting cost him a contract with publisher Harper Collins and has labeled him “a known liar” by people close to the Clintons. The press tries to discredit and ridicule Klein’s “loosely sourced” work and character, describing Kline as “universally despised” “Ed Slime.” Klein’s publisher, Regnery, insists that the reporting is accurate.

Klein’s response to The Guardian: “Attacking the messenger to hide the truth is the first page of the Clinton playbook.”