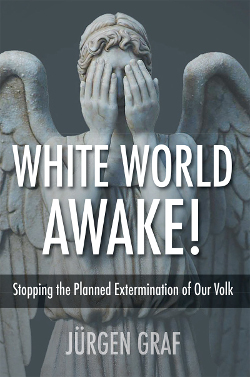 Stopping the Planned Extermination of Our Volk

Western civilization is in desperate peril. White people—our volk—are in trouble. The question of the day—and very likely the question of the millennium—is whether Europe will survive—and with it its American, Canadian, Australian and South African cousins—and, if so, how? Seeking to answer those questions is a very important new book, White World Awake! Stopping the Planned Extermination of Our Volk. Those who seek the truth will find the truth in the pages of this book, and those looking for a practical plan of action will find that as well.
For too long, observes the author, White people have fought among themselves. The European Union and NATO are failed efforts to correct that situation. Europe faces an existential threat with tsunamis of unassimilable Africans, Middle Easterners and Asians swarming in. Russians, Britons, Frenchmen, Germans and Poles, Serbs and Croats, Romanians, Finns and Greeks, Spaniards and Hungarians are all in the same rickety boat. The time has come for Europe to speak with one nationalist voice on military and foreign policy matters, while it is equally necessary for each nation and ethnic group to preserve its distinctive language and culture, and for historical injustices to be discussed openly.

A Eurasian Federation is proposed, which, like Old America, will not interfere in other parts of the world except to provide humanitarian aid and ensure the safety of such places as Armenia and Georgia against any immigration threat.
Traitor politicians who see no problem in allowing Europe and other White nations to be transformed into mixed-race caliphates—a dream of the mysterious Richard von Coudenhove-Kalergi—will be voted out of office.
Many of the solutions apply equally to the rest of the White World. “Close the borders! Stop the flood!” is key not only for Europe, but America and all other White areas of the world. Thus Graf lays out a practical 10-step program to stop the genocide of the West starting with Europe, the cradle of White Western civilization.

This is a book that needs and deserves to be in the hands of every concerned person who cares about the future of the Western world.
Softcover, 540 pages.