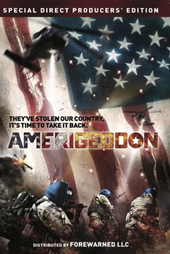 A fictional depiction of a future wherein a globalist terrorist organization aligned with the United Nations to disable the United States’ power grid and institutes martial law. It will take a dedicated family of patriots armed with strong survival skills and the remains of the Second Amendment to save America and reclaim its freedom.

AMERIGEDDON has been described as “the movie the establishment doesn’t want you to see.” Showing what happens when a not-so-future U.S. government conspires with the United Nations to stage an attack on the energy grid, AMERIGEDDON depicts a country ruled by martial law in which citizens are stripped of their constitutional rights and their guns. A group of patriots fights back and rescues the country from slipping into irreversible chaos.

The film illustrates a dystopian future all patriots must guard against and is a call to action to preserve the Second Amendment and stop executive rule by fiat. Director Mike Norris, son of Chuck Norris, asks for like-minded Americans to support the film.

“The fact that a recent poll showed a majority of Americans are enraged with the federal government points to a frenzy of unrest with the dictatorial way in which our country has been run,” said Norris. “My family has long been involved in protecting the rights of Americans. We are concerned about the future and and see this film as a call to action. We urge people to join us in theaters and show Hollywood and politicians that true patriots will fight for their rights and want to see their values represented on-screen.”

A collaboration between Norris and entrepreneur and writer Gary Heavin, AMERIGEDDON seizes on fact-based threats and asks the ultimate question, “What happens when government turns on the people it’s supposed to protect?”

Executive Producer Gary Heavin believes the film’s message warning is timely. “We made a movie that is fun to watch but it is based in reality. In AMERIGEDDON, survivors of an EMP attack on the United States must live in a state of martial law led by the United Nations. American soldiers must decide whom they serve, Second Amendment rights are curtailed and food, water and survival become our primary concerns—unfortunately, these are all likely scenarios resulting from a very real threat,” said Heavin. “I believe if we can entertain while we inform, more people will wake up; and if we hope to restore our freedom we must share the truth with as many people as possible.”

“…what happens when government turns against you..ultimate political thriller..all Americans should prepare for this type of situation..” — FOX & FRIENDS

“…blockbuster.. finally someone has made a movie about it (EMP threat)..God is using movies to speak prophetically to His people..” — TRUNEWS, ONLINE CONSERVATIVE CHRISTIAN NEWS OUTLET

“Amerigeddon is Red Dawn Part 2..makes you think and is a lot of fun!” — DAVID KNIGHT, INFO WARS

“…certain movies come out just at the right time, encapsulating the inner-dialog of a generation. One film, that just might be part of our cultural could be the upcoming movie AmeriGEDDON… combination of history and character. Director Mike Norris tells a powerful story.” — OATHKEEPERS

“…thrilling and informative and terrifying. captured the essence of the dangers which presently confront the American people with clarity and detail…” — DAVE HODGES, THE COMMON SENSE SHOW

“…Amerigeddon, which predicts and exposes the truth and what we could be looking at in the future.” — BEFOREITSNEWS.COM, ONLINE CONSERVATIVE NEWS OUTLET

“…very cool film..one of a handful of conservative, independent movies coming out without Hollywood-machine..encourage you to go see it..a great movie!” — KLYO-AM, LUBBOCK

“…entertainment vehicle to wake up the American public..” — COAST 2 COAST

“…very very cool. With everything happening in our country is this a precursor for our future? Makes people aware and woken people up… check it out!” — JACK AND RON SHOW, FUN-96.9FM, OKLAHOMA CITY

“…This movie is not mere entertainment; it’s also a warning..” — BANNER NEWSPAPER, TULSA

“…A dire warning of a wake up call..” — DALLAS OBSERVER, DALLAS MAGAZINE